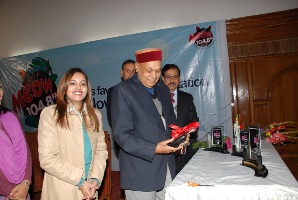 Big FM 92.4, a FM Radio Station of Reliance Group was also launched by the chief minister, a few months ago.

Speaking on the occasion, Dhumal said that expansion and opening of new Radio Stations and TV channels indicated that electronic media was growing at a fast pace.

Although there was an immense potential of electronic media in the country, yet the credibility of some of the private TV Channels was at stake, he said. At times it even becomes difficult to enjoy programmes on some TV channels with family members, he added.

Chief Minister maintained that Radio channels were basically committed to educate, inform and entertain the masses but at the same time listeners and society expected these to maintain a high level of credibility and healthy entertainment. He said that we were living in an age of Information Technology and growth of electronic media is attributed to the inquisitive nature of the people to know about the global happenings.

He said that all the Radio Stations should showcase their programme in such a manner that besides entertainment these also emerge as fruitful forums to highlight the problems of people at large and become a medium of redressal of their grievances also. He urged the Meow â€“104.8 FM Radio Station to maintain a high level of professional standard and come up to the expectations of people. He hoped that the interactive programmes will help the listeners by involving and associating them in the topical discussions of social relevance.

T. Lokashya, Chief General Manager of State Bank of Patiala Head Office Patiala said that electronic media including Radio Stations played a vital role in generating social awareness and added that the meaningful talks and discussions to be aired by FM Radio would benefit the people to a great extent.

Shradha Mishra, Station Head of FM Radio Station Patiala assured the audience that the new FM at Shimla would surely strive to come upto the expectations of people and gain popularity soon.

Earlier, Prem Kumar Dhumal launched the new FM Radio by lighting the lamp and by switching on Radio set. Suresh Bhardwaj, local MLA was also present on the occasion.