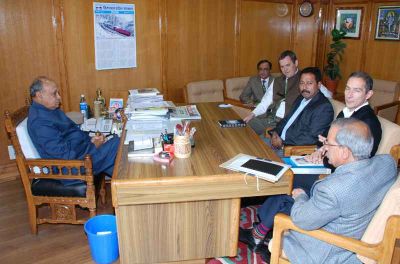 Shimla: Having a definitive impact on rural poverty, Rs 365 crore Mid Himalayan watershed program being implemented across 602 panchayats has increased household incomes by as much as 9 percent, a review meet has revealed.

Over 5 percent of below poverty line families in the region had been alleviated to above poverty line category,â€ said Dhumal adding, household incomes had shown a 9 percent increase.

Dhumal let the visiting officials know that by constructing 5933 mini and micro irrigation schemes an additional area of 1,724 hectares in the project region had been brought under assured irrigation benefitting 20,795 families, he added.

High value crops in the project area had shown an increase of 26 percent. Vegetable production alone had increased by 43 percent that had brought about discernible impact in the rural economy.

Productivity of traditional crops had increased by 6 percent and that of fruit crops by 11 percent, he said.

The state was exploring possibilities of pooling all internal and external resources to protect and conserve Himalayan ecology.

Spelling out measures ban of green felling, plantation drives, banishing usage of plastic bags, taken to attain carbon neutrality, the chief minister sough the banks intervention in assisting the state in its objective.

Ranjan Samantry, co-task leader of the World Bank team asked the government to submit a project for consideration of Himachal as a carbon neutral state, said the government official. The bank would be considering the requirements for it, he added.

Norman Piccani, World Bank team leader stressed up a more effective management of water resources and related activities as more traditional water sources the world over were drying up and so was the ground water level receding.