Shimla: To broad base technical education, chief minister Prem Kumar Dhumal today announced opening of five more polytechnic institutes of which one would be in tribal district of Kinnaur. 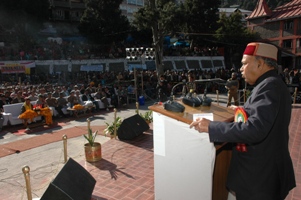 Speaking at the closing ceremony of Kinnaur Mahotsav, a four day festival held at district headquarter Reckong Peo, the chief minister said that skilled manpower was in great demand world over and being equipped with right kind of skills provided ample opportunities of employment as well as self-employment.

He said that the government had targeted to open a polytechnic institute in every district and of the five new such instituted proposed to be set up soon, one would be in Kinnaur.

Stressing on the agrarian thrust being laid by the government, Dhumal said that much benefit could be availed under the Rs 353 Cr Pandit Deen Dyal Kissan Bhagwan Samridhi Yogna that had an subsidy component upto 80 percent and also of the Rs 300 crore Doodh Ganga project launched recently.