Shimla: Heavy snowfall occurred on the high reaches of Himachal Pradesh as a fresh spell of rain and snow occurred in many parts of Himachal during the last 24 hrs, Met Office said today. The 13050 feet high Rohtang Pass and 14000 feet Baralacha is already caped with four to five feet thick snow cover blocking the Manali- Leh road at several places.

Many roads in Lahaul-Spiti district are still snow bounded and as many as 50 vehicles are still stranded in the way waiting to clear snow from the link roads. The district administration has launched snow clearing operation to maintain the supply of essential commodities to people in the snowline areas of Chamba district of State. 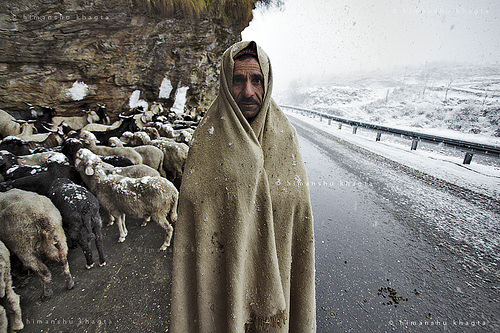 Heavy snowfall was also reported in higher reaches of Kangra and Kullu district which has intensified the clod wave in the entire region. Fresh snowfall in the state has frozen Surajtal and Chandertal lake in Lahaul-Spiti district, Manimesh in Chamba and others natural lakes in the region.

Rains have been lashing the region as well with Dharamshala receiving about 48 mm rainfall followed by Palampur with 39 mm, Bhuntar 11 mm and Kalpa has 9.4 mm. The agriculture experts are of the observation that the fresh spell of snow and rainfall is good for germination and sowing for Rabi Crop in this hill state. The wet weather is keeping optimum moisture content in the soil.

Visibility over the days has remained low during the day as there was haze and Sky remained mostly cloudy during the day when minimum and maximum temperature were marginally low in the state.

Photo and Video by: Himanshu Khagta