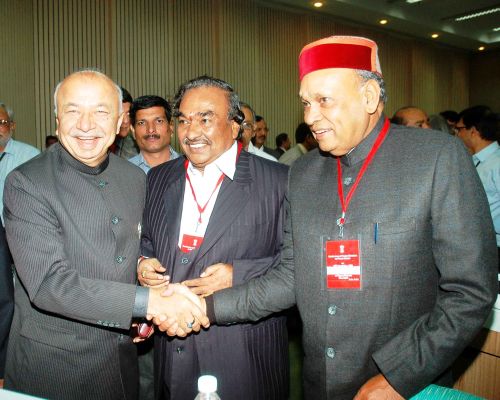 Shimla: To cope up with winter power shortages when hydropower generation dips to a low point, chief minister Prem Kumar Dhumal sought setting up of a gas based 500 MW power plant so as to meet consumptive needs.

Speaking at the power minister conference in Delhi, today the chief minister said that the gap between demand and supply was likely to 800 MW by 2012, which would affect industrialization as well as other consumer needs. Dhumal asked the centre to set up a mega gas power plant to offset such shortages.

He asked the central government to increase 100 MW allocation to 400 MW from ultra mega power projects to the State, to meet increased energy needs.

Dhumal informed the gathering that out of the total hydropower potential of 23,000 MW, the state had harnessed 6500 MW. The state will have harnessed 10,000 MW by the end of 11th plan and by 12th plan the harnessed capacity would touch 15000 MW, he said.

Dhumal said that the all the census villages in Himachal were electrified and there was 100 percent consumer metering, billing and collection. Aggregate technical and commercial losses were at 15.1 percent which is one of the lowest in the country.

Seeking funding to meet huge investment needs for development of hydropower and establishement of a transmission network, the chief minister said that electricity consumers in the state enjoy one of the lowest tariffs in the country and no category of consumers is given free electricity.