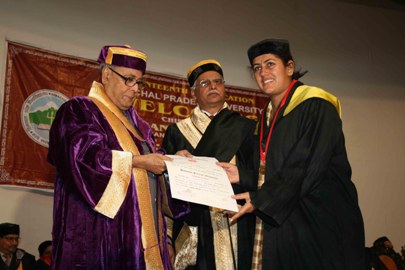 Shimla: For universities to become a hub of research, Pranab Mukherjee, the union finance minister asked them to effect reforms in the structures of their governance that presently fail to preserve autonomy and do not promote accountability.

The minister said that he was in favour of establishing smaller universities that are responsive to change and easier to manage. â€œIt is only thus that universities would become a hub of research to capture synergies between teaching and research that mutually benefit each other,â€™ he said.

To create skills commensurate with requirements of industry, the central government has initiated a National Skill Development Mission, he said, adding that based on the National Knowledge Commission report high priority has been placed on education for achieving rapid and inclusive growth.

Proposed allocation of Rs 3 trillion in the 11th plan, a fourfold increase over the 10th plan, showed the governmentâ€™s commitment towards achieving the targets, said Mukherjee. Share of education in the total plan would increase from 7.7 percent to 20 percent representing a credible progress towards the target of 6 percent of GDP, he added.

Calling upon young scholars to steer the countryâ€™s future course, the minister said that India was well on its way to become a economic power to reckon with and country needed young people to take charge of affairs.

He said that with 65 percent the current population below 30 years of age, this large mass was both an asset and a threat. The daunting task before governments and educationists was to turn this population into an asset through the instrumentality of education, he said.

On corruption, he said, to build a strong and prosperous nation, there was need to fight corruption in all walks of life, especially so, in public life. 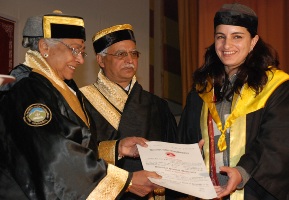 Earlier Governor Prabha Rau presided over the convocation where PhD scholars were awarded their degrees. Toppers of post graduate and undergraduate courses were awarded gold medal by the union minister and ID Dhiman , the state education minister.

As many as 415 degreeâ€™s, medals and prizes were conferred and decorated, which included one D.Lit, 187 Ph.D.â€™s and 227 Medals and Prizes, during the convocation. Girl students beat their male counterparts in both the degrees and medals awarded. 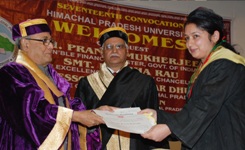 Vice-chancellor Sunil Kumar Gupta in his concluding speech said that convocation would be held annually and all the previous years backlog of awarding the degrees stood cleared.