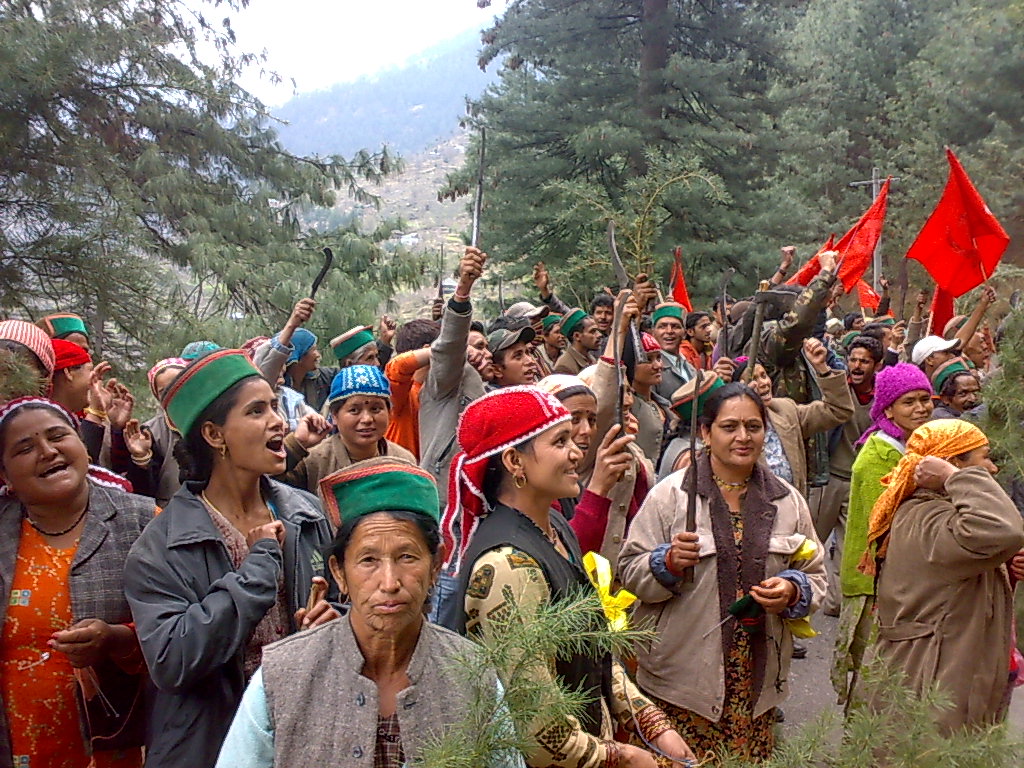 Shimla: Women are up in arms in Banal, Jori and Shoja villages in Beas Valley, opposing cutting of forest trees for laying of a power transmission line, even as power grid officials push their way to start work on establishing a grid station that would evacuate power generated from many hydropower plants in the region.

Leading the group Leela Thakur, head of Banal Mahila Mandal says, â€œWe will not allow cutting of any trees in the area.â€ The womenâ€™s group resisted marking of trees for felling on Wednesday.

Officials from transmission company, accompanied by police and forest officials are trying to browbeat women and locals into permitting felling of trees here, says Mian Gulab Singh, a resident of the area who is a member of Himalaya Bachao Andolan, an environmental NGO.

Leela adds, â€œno government official has come to talk to us. We were told that no trees would be cut without obtaining permission from the local panchyat but now they are trying to scare us by bringing uniformed policemen along.â€.

To lay the grid station, 23 bighas of land has been acquired and an additional 12 bighas of forest land is expected to be used.

About 640 trees face the axe for setting up the station and for laying of the transmission lines that would be needed first to evacuate over 1400 MW of power from the upcoming Parbati II and Parbati III hydropower projects.

Fearing environmental degradation to the green valley, besides felling of the trees, Main Gulab Singh holds that vested interests were insisting upon setting up the station at Banal where as across the valley were barren mountains that could be used for the purpose and save terraced fertile cropping fields and cutting of many trees.

â€œThe station site has been selected after a through survey,â€ says a grid official without wanting to be named, â€œand the transmission line is behind schedule to evacuate power from the upcoming power stations in the area.â€

There is apprehension that trees are being felled, he clarified, whereas we are only numbering the trees falling within the transmission line corridor so that permission may be obtained to convert forest land for non-forestry purposes as well as to arrive at a compensation timber value of the trees that would need to be felled.

Regarding the grid sub-station he said, private land had been acquired and sanction of forest land for the station had been approved. â€œThe land would be handed over to us only after the HP forest corporation clears it of the trees,â€ said the power grid official.

Supporting the womenâ€™s and residentâ€™s cause Guman Singh, convener, Himalaya Bacchao Andolan says, laying of transmission lines are governed by the century old Indian Telegraph Act and people are being forced to part with their land as well surrender their forest rights to make way for them.

We intend to take up the matter with the environment ministry, for the grid company intends to make the station a junction for power lines from many plants, which is bound to cause much environment damage to the area, says Singh.