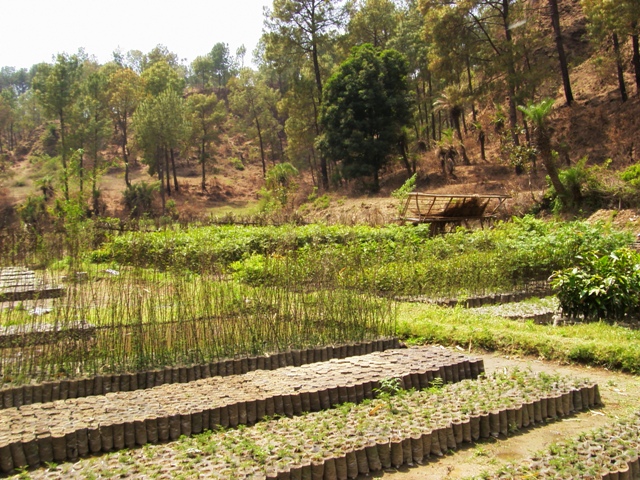 From being the sorrow of Una to ushering in a green revolution, taming of Swan River is changing livelihoods where people are now reclaiming the land that once they considered the fast flowing river would someday eventually erode and consume.

Started in 2007-08 an amount of Rs 23.3 crores was spent in the last financial year in 15 Gram Panchayats of Una district on forestation, soil and water management and livelihood improvement programs.

Another Rs 20 crore is marked for the current year to carry out various activities which include constructing water harvesting projects. In Una, Gagret and Amb areas, 21 water harvesting structures involving an investment of Rs 1.50 crore has been already created, said an official spokesman.

Channelisation of the complete river system would benefit about 61,900 hectares spread out over 95 Gram Panchyatas of Una district, he added.

With a holding of just 9 canals of farmland, Kartar Chand of Takrala village barely eked out a living until pond to store the rain run-off water was constructed under the project.

Not only is Kartar, today able to irrigate his entire land but with assured water available, he has shifted to growing high value crops like off-season vegetables that fetches him better returns.

Habib Mohammad, another marginal farmer of Takrala, has seen his income increase manifold as both productivity and changes cropping patterns bring prosperity to the household.

Nangnoli was picked out for soil and moisture conservation by starting a forestation program in the Panchayat.

Catchment area treatment helped to recharge the groundwater systems for water began to fill again in an otherwise dry well in the village. 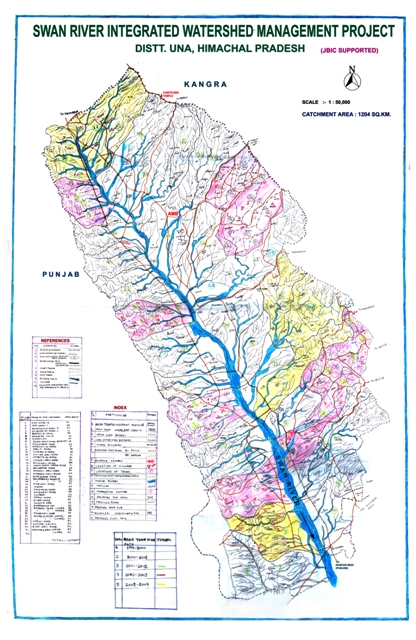 Even after installing an electric pump that is operated for about 15 hours a day, the 40 user families find it nothing short of a miracle that the well still does not go dry.

This land is heavily honey combed by private cultivations, which is the main stay of the local population. As major part of the catchment area of Swan River had a poor vegetative cover, it gave birth to notorious Swan River, labeled as the sorrow of Una District.

Not only was the river responsible for dwindling economy of the area but its frequent course changing during rainy season, wrecked havoc bringing floods, spreading debris on fertile lands rendering the people hapless to fight the calamity.

Success in partially taming the Swan flows has enabled the state to get an approval from the central government for additional funding of Rs 235.2 crore for the second phase of the project.

Ninety percent of the project funding is handed out as central assistance and only 10 percent is a loan that the state has to repay over a long period.