Shimla: Environmentalist Baljit Malik, known for being in the forefront of Kasauli Baccahoo Andolan has put a poser for Himachal High Court administration to prove whether the 11 storied building that houses the judges and oversees the justice system in the state, was legal or illegal? 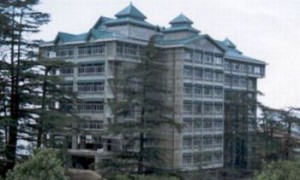 Speaking to select media, Malik said, “If the building is illegal, why should it not be sealed like it is done for every common citizen?”

Terming the High Court building, which incidentally is the tallest building in the capital as a ‘monstrosity’,  he claimed that the structure had not only destabilized the mountain area where it is built, damaged the surroundings and left most trees in the vicinity diseased.

“If the new Himachal High Court building is within the building laws, then why bind the ordinary citizens who are not permitted more than 4 floors in the city,” he said.

“For seeking justice, the system seeks that the pleader come before the courts with clean hands,” said Malik, “the High Court administration should set a precedent.”

However, deputy mayor Harish Janartha differed. He said, “with the High Court itself housed in the multi-storied building, it was certainly legal.”

He maintained that such public buildings were outside the purview of the municipal building laws and were directly dealt by the country and town planning department and the state cabinet. “Municipal laws only permitted three floors plus one parking floor for residential buildings,” he said.

“Leading by example the court needed to intervene for permitting other high rise public utility buildings, be it hospitals, schools or multi-storied parking” as the city was facing land scarcity,” said Janartha.

Malik on the other hand came down harshly on the country and town planning department. The environmentalist disclosed that the Shimla master city plan that should have out in 1993-94, has still to see the light of the day.

Pointing out another public building, he said that the Indira Gandhi Sports complex located at Combermere on The Mall is another super structure that violates permissible building laws for Shimla.

“Residents and tourists would not even be aware that there was a beautiful waterfall where the building has come up,” he said.

An alumnae of Doon school, who also taught in the school and counts NDTV’s Prannoy Roy, road transport and highways minister Kamal Nath and writers Vikram Seth and Amitav Gosh among his students said, because of unsound planning Shimla had been defaced much since he first set foot here in 1945.

As coordinator of Kasauli Bachao Andolan having petitioned the court for conserving Kasauli township that is falling prey to builders, Malik says, “even after 3 years of hearings in the court, town planners had failed to submit a master plan for Kasauli.”

He said that he was documenting violations taking place along national highway  22, a strategic defense road earlier called Hindustan Tibet road, to bring out elements that were destabilizing the roads strategic importance.