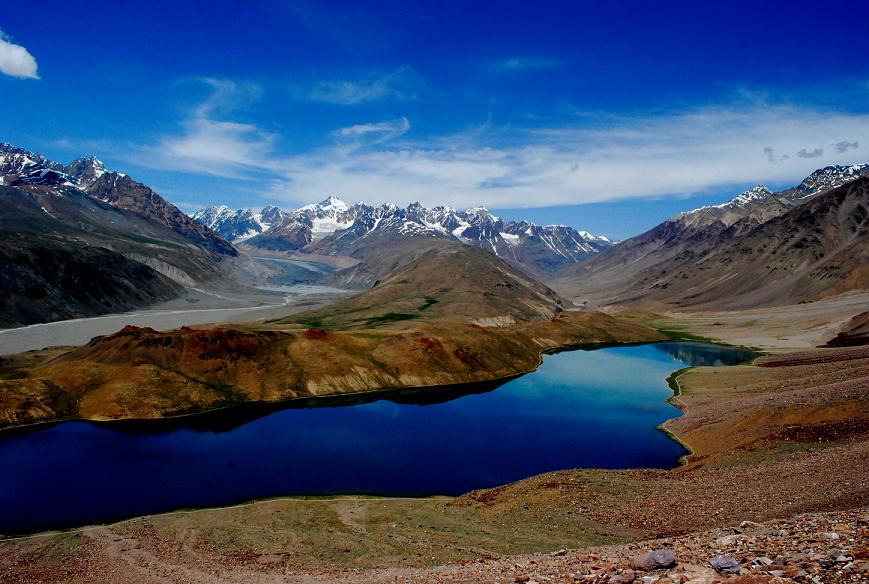 In the beauty of nature lies the spirit of hope and for areas like Chandertaal its important to keep the hope alive . Â As a child I heard of the lake of the moon, its legend of fairy mermaids and of its beauty which remained unparalleled. When I was fifteen Chandertaal (4,270 meters) became my first trek. Starting from the mountaineering institute at Manali Â in the wee hours of the morning we drove to Batal, climbed up the Kunzum laÂ  and then trekked to Chandertaal. I still remember my lungs panting for the want of oxygen or rather the lack of it, in Kunzumâ€™s thin rarified atmosphere.

Taking a small dingy boat used by the Indian Navy we made the best out of this lake. While the rest of the group went rock climbing, I took the boat with the help of umbrellas as sails and explored the amazing blue waters. Amongst my aqua escapades was also to measure the depth of the lake with the help of a stone filled bucket and rock climbing ropes â€¦.an experiment which led to the conclusion that the lake was way deep than we thought.

The Chandertaal lake (320 29â€™ N, 770 36â€™ E)Â  lies 6 kms from Kunzum Pass, which joins the great Himalayan and Peer Panjal ranges surrounded by snow capped peaks and acres of scree reflecting the Chandra Bhaga range in its deep blue waters. A place so beautiful is worshipped by the locals of Lahaul, Spiti and Kullu alike who always end up doing the amazing Parikarama of the 2.5 wide circumference of the lake.

The lake has been carved Â out by the forces of Â natures as the rock basin has been closed by the scree of rocks . Fed by paraglacial deposits and massive glaciers which surround the lake resulting inÂ  a regular flow of water whichÂ  keeps the lake clean though the outflow differs from season to season. Its special value is attributed to high altitude , excessive cold, aridity , low oxygen and an intense radiation. Free from any signs of Eutrophication ( an increase in theÂ concentrationÂ of chemicalÂ nutrientsÂ in anÂ ecosystemÂ to an extent that increases in theÂ primary productivityÂ of the ecosystem) the lake has an immsely low turbidity. 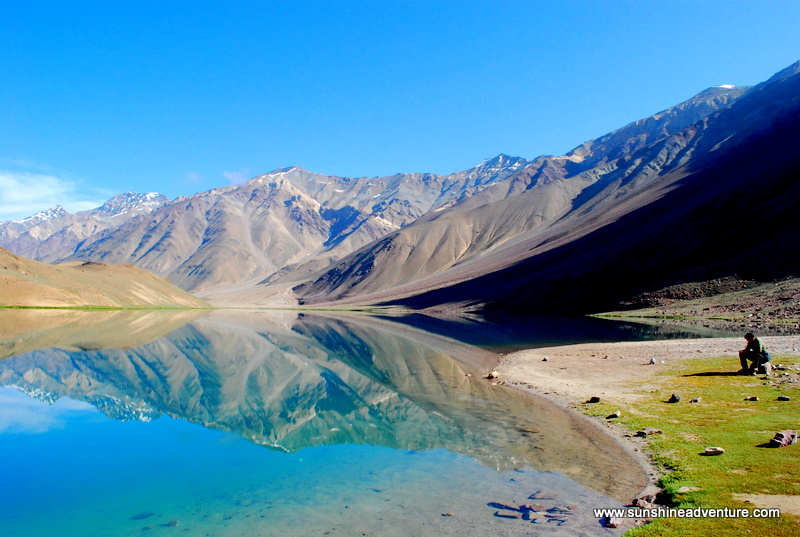 Flora and Fauna : Chandertal is an important site for migratory bird during summer. Large variety of species is found in the wetland, which includes Snow cock (Tetraogallus himalayensis), Chukor, Black ring stilt (Himantopus mexicanus), Brahmi ducks (Tadorna ferruginea), Kestrel (Falco tinnunculus), Golden eagle (Aquila chrysaetos) and Chough (Pyrrhocorax pyrrhocorax). A large number of mammals are present in the catchment area of the lake like: Snow Leopard, Red Fox (Vulpes vulpes), Wolf, Ibex, Blue Sheep/Bharal Pseudois nayaur etc. are the common mammals of the area. In addition, to the mammals and birds, the region abounds in various insects during the summer season. The insect fauna consists of spiders, beetles, wingless grasshopperâ€™s butterflies and bugs. The margins of the lake abound in larvae of mayflies, stoneflies and caddis flies.

The Chandertal Lake supports endangered mammalian species i.e. Snow Leopard (Panthera uncia), Bobak Marmot (Marmota bobak), Royalâ€™s vole (Alticola roylei), Himalayan Ibex (Capra sibirica hemalayanus), Blue Sheep (Pseudois nayaur) mentioned in IUCN Red List and CITES. Chandertal Lake is of special value for its endemic plant and animal communities. Â The wetland had been identified as a wetland of national importance in 2005, due to presence of rare plants, variety of animal species and its role in the maintenance of eco biodiversity of the region. Â Â The flora and fauna have specialized morphological and physiological features to counteract the unfavorable effects of the extreme environmental conditions.

Geology :
Chandertal area is covered by glacial type of soil, which is not fully developed. About 65% of the catchment area is a degraded forest due to glacial action and seasonal grazing by migratory graziers. Herbs and grasses cover rest of 35% of the area. Chandertaal wetland helps the reduction of flood in downstream as water moves into wetland faster than it moves out downstream part of the channel. Wetland also helps in the retention of moisture in the catchments and subsequently in the growth of grasses and herbaceous plants which protect the land against erosion in the summer season.

Tourism Impacts :
During the tourist season a large number of visitors pollute the water quality of the lake by leaving garbage after camping. This adds toxicity to the marine life (Pisciculture) as the camping spot on the alpine meadow at the northern end drains into the lake. The whole Chandertal and its catchment area are grazed heavily by migratory grazers every year. The combined effect of the visitors and herdsmen contribute to increased siltation and organic influx into the lake. Due to the historical and tourism importance of the lake, the construction of a road was undertaken during 1985- 86. But the road construction was stopped in 2004 but not before it has paved the way to pollution and opened doors to play around with this fragile ecosystem. Â The whole catchments of the lake are fragile and susceptible to ecological degradation because of the geology and sparse vegetation.Â  The increased tourism activity has resulted in generation of solid waste and dumping, which would in turn affect the water quality of the lake.

Tourism and grazing pressures are taking a toll on Chandertaals fragile environment After a long halt at the lake I was shocked to see the change in the area. The garbage disposal pits are full and the lake was littered with plastic mainly bottles of drinking water, tin cans left by expeditions, magi packets, gutka and tabaco packets. An absence of sign boards meant that the tourists had no idea about the faunal and floral importance of the place. Moreover a lack of conservational messages meant the lake was wide open to the whims of environmentally unconscious tourist who just excelled in throwing stones in the lake. The lone Shepard who runs a Dhaba was the only resident of the lake providing basic camping accommodation and fresh food for the tourist. The lake has also suffered due to the lack of coordination between the Forest and the tourism department. Half hearted attempts at making a walking trail has resulted in useless diggingÂ  dug by the tourism department who were trying to put a stone walking trail around the lake. There have been no attempts to rectify this with extreme weather and wind causing more harm to the banks of the lake. Upon hours of talk with the Shepard who depends on the lake for his bread and butter revealed some shocking statistics. 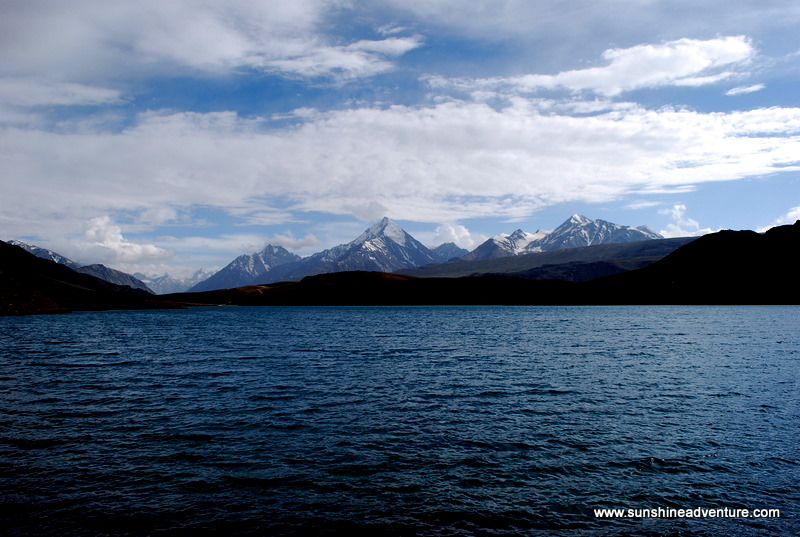 IÂ also went and met the local Shepardâ€™s who are now worried about being relocated. These nomadic herdsmen pass through the Chandra valley with huge flocks of sheep and goats graze the meadows. The whole Chandertaal and its catchments area are grazed heavily by migratory grazers every year. The combined effect of the visitors and herdsmen does contribute to increased siltation and organic influx into the lake.

One recommends the following:

Dry Pit Toilets and a well managed campsite along with an effective garbage disposal is an immediate need of the hour. Some of the other recommendations that are worthwhile considering are:

Writer is an avid trekker and runs Sunshine Adventure.
The writer is responsible for the authenticity/originality of the content and My Himachal holds no responsibility on this account.