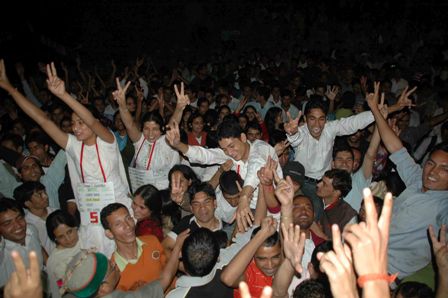 Shimla: Backing of the party in power has not helped the saffron outfit Akhil Bhariya Vidyarthi Parishad (ABVP) make much gains in the students elections here as left oriented Students Federation of India (SFI) won all four seats at Himachal Pradesh University, results of which were declared late in the evening, today.

Last year ABVP had been able to win the joint-secretary election but were unable to hold onto their gains in this election.

Earlier during voting, the police intervened and took two SFI activist into preventive detention. Surinder, president SFI and Manish Sharma, a MTech student who has been expelled from the university but whose name figured in the voter list were detained by the police.

RM Sharma, district police chief said, â€œthe duo were taken into preventive custody for obstructing and assaulting a government official while on duty.â€

Elsewhere at Rashtriya Kanya Maha Vidyalayah (RKMV) government girls college Shimla, it was a clean sweep for communist affiliated organisation Students Federation of India (SFI) who won all the four positions â€“ President, Vice-President, General Secretary and Joint-secretary, for which voting was held earlier in the day.

Elections at the Government college Kotshera, threw up a mixed result with the presidents and joint-secretaries position being won by BJP backed ABVP backed candidates and the vice-president and general secretary position won by SFI.