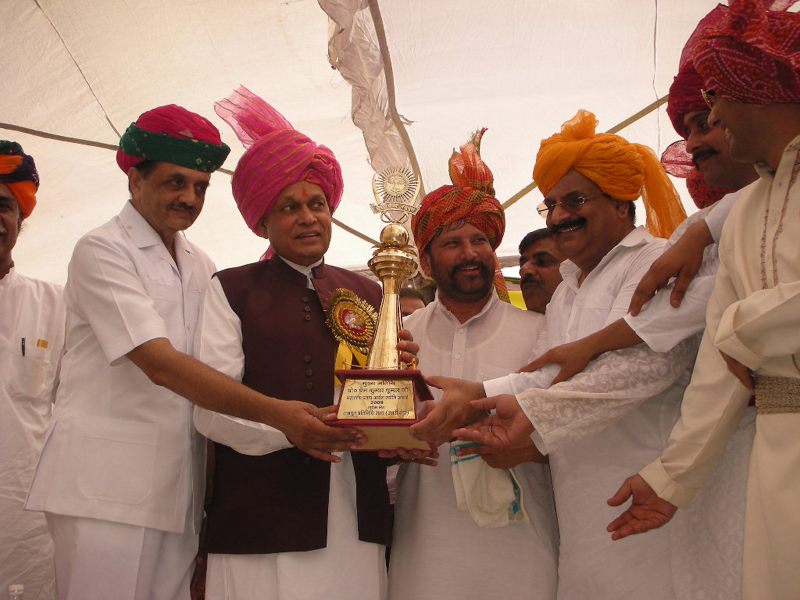 State would be extending all cooperation for the organisation of functions connected with the historical events and the great warriors. This was stated by Prof. Prem Kumar Dhumal, Chief Minister, while addressing the Maharana Pratap Adarsh Sammelan at Kathgarh in Nurpur Sub-Division of district Kangra. He said that possibilities would be explored to construct Maharana Pratap Bhawan at Kathgarh and announced a grant of Rs. 11 lakh to start the construction of the same.

Chief Minister expressed concern over the decreasing female birth rate in the State, especially in the border districts which was likely to destabilise the entire society. He said that women was revered and had been provided honourable status in the society. He said that one educated women means a completely educated family while an educated man educates only one individual. He appealed for peopleâ€™s cooperation in checking female foeticide in their areas and informs the local authorities of any such incident taking place in their areas. He said that besides individuals the Gram Panchayats would be honoured with additional developmental grants while informating leading to checking of such activities and would also be given cash prizes. He reiterated the State Government resolve to extend due honour to the women in the society and 50 percent reservation would be available to the women in coming Panchayati Raj elections in the State to ensure their proportionate representation in the grass root level units of democracy. He urged the women community to extend their full cooperation to make the campaign launched by the State Government a grand success.

Chief Minister said that Himachal Pradesh was nursery of brave soldiers as it had been producing soldiers who fought against the aggressors vigorously. He said that the First Param Vir Chakra was awarded to Major Som Nath Sharma, who hailed from Kangra district while out of four Param Vir Chakras awarded during Operation Vijay in Kargil, two were won by brave sons from Himachal Pradesh, out of which one was awarded posthumously to Capt. Vikram Batra of Palampur while another was won by Havildar Sanjay

Kumar of Bilaspur. He said that it was no less achievement for the people of the State since its brave sons had earned laurels to the nation and the state with their brave acts and sacrifices. He said that the State Government had provided an attractive package to the martyrs of Kargil and he visited every house of the martyrs to offer condolences in person.

Prof. Dhumal also announced a grant of Rs. 21,000 to the school children who presented an impressive cultural programme on the occasion.

Chief Minister was accorded a rousing reception by the organisers of the function and public in general enroute from Rehan to Kathgarh. He also listened to public grievances at the venue of meeting after the function was over and passed necessary directions to the concerned authorities to deliver relief to the aggrieved parties.

Maharaja Raghuvir Singh, Maharana of Sirohi of Rajasthan cited quotations from the oldest scripture Rigveda which finds mention of â€˜Kshatriyaâ€™ community as warrior race assigned the duty to protect the society. He said that Maharana Pratap could never be defeated by Mughal ruler Akbar who struggled life long to fight out the great warrior.

Shri Lal Singh Chaudhry, MP Lok Sabha, Udhampur, J&K, said that Dogra community had been serving the armed forces and guarding national boundaries efficiently. He narrated stories of bravery the community from national history. He said that national interests and security was above all political considerations.

Shri Ravinder Singh Ravi, Irrigation and Public Health Minister said that Maharana Pratap had dedicated his life towards eradication of social vices from the society. He said that teachings of Maharana Pratap were more relevant in the present day context. He narrated stories of the brave soldiers hailing from the State who earned laurels to the country and the State.

Cap. Vikram Singh, Chairman, Maharaja Prithvi Raj Memorial Trust and Shri Surender Kaswal of Punjab counted the sacrifices made by Maharana Pratap and said that Rajput community had rendered exemplary services towards the national cause.

Shri Rajesh Thakur, Organising Secretary, welcomed the Chief Minister and other dignitaries of the State Level Function and detailed activities of the organisation.