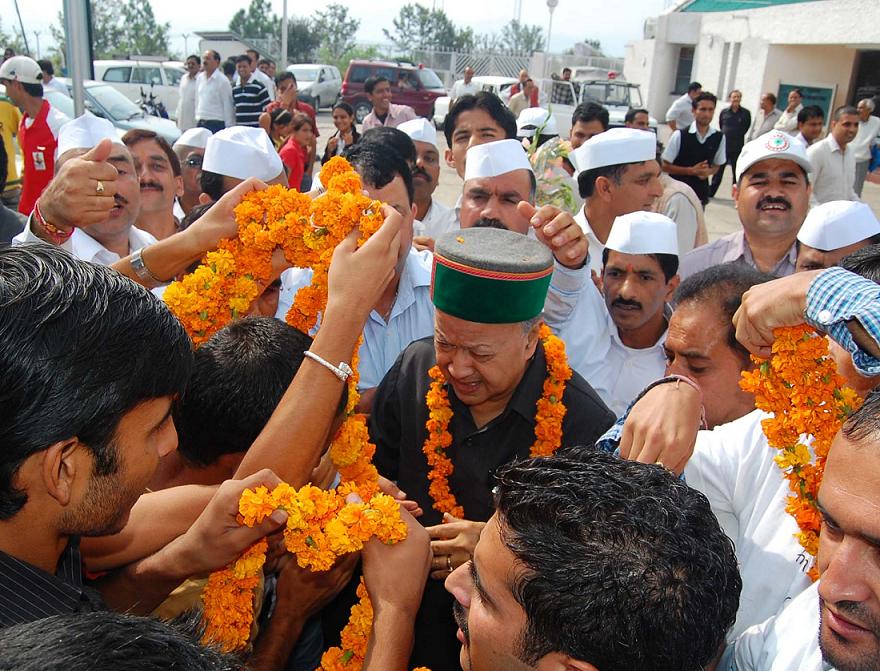 Shimla: Union Steel Minister Virbhadra Singh has hit out at chief minister Prem Kumar Dhumal saying the BJP government under him was being vindictive by registering false corruption cases against him and his wife Pratibha Singh.

Speaking to reporters at his residence Holly Lodge, he said, the BJP government is attempting to settle scores with congress by registering frivolous and false cases.

Such tactics will not prevail as the earlier BJP governments also tried to malign me but nothing emerged, he said.

Iâ€™m not afraid and will face the cases, he added

State vigilance and anti corruption bureau registered a case against Virbhadra Singh and his wife Pratibha on 3rd August under Prevention of Corruption Act 1988 holding that the former chief minister had misused his official position for alleged criminal misconduct when he was chief minister in the year 1989.

â€œDhumal is functioning in an autocratic manner and using the state police to settle personal scores,â€ he said. Peaceful political atmosphere of the state stands vitiated, he added.

â€œThe case is nothing but petty politicking just before a by-election to the Rohru assembly seat,â€ said Virbhadra. The seat is unrepresented as it fell vacant after the union steel minister was elected to parliament from Mandi seat in May.

After registration of the criminal case, the five-time former chief minister is visiting the state for the first time.

The police has made out a case on the basis of an audio CD that was made public by Virbhadraâ€™s bÃªte noire Vijay Singh Mankotia just before a crucial by-election to Hamirpur parliamentary seat in May 2007, which was contested by Prem Kumar Dhumal.

The recorded phone conversation on the CD is said to be two decades old and allegedly has the union steel minister and his wife Pratibha Singh talking to deceased IAS officer Mohinder Lal about some illegal transactions.

The controversial CD was sent for voice analysis to the Chandigarh-based Central Forensic Science Laboratory, which reported a likely probability of the voices being that of Singh and his wife.

On his part Dhumal has denied any vindictiveness in the matter, saying that the matter was referred for vigilance investigation by the previous congress government only.

Law is taking its course and we will only follow the legal procedure, he has said.