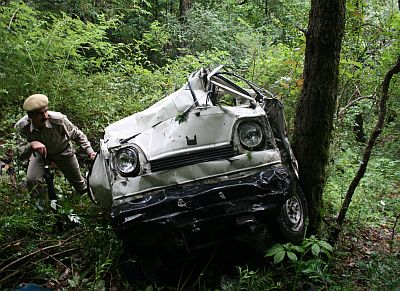 Shimla: Two person, Bharat Bhusan Kalia (32) and Manhoar Lal Bhist (29), died on the spot after their vehicle (HP-51-848) lost control and went off the road at Kuftadhar, a Shimla suburb, on Tuesday afternoon.

The vehicle only came to a stop after rolling about 200 feet down the hill side, killing both the occupants.

The state has a high rate of accidents because of its difficult and pathetic road conditions.

According to police records, rash driving, overloading, untrained drivers, mechanically unfit vehicles and poor roads have been among the factors that killed cause for the death of 7,912 people in road accidents in the past 10 years.

The number of accidental deaths was at an all-time high in 2007 when 979 people lost their lives in 2,955 accidents. Last year, 581 people were killed.