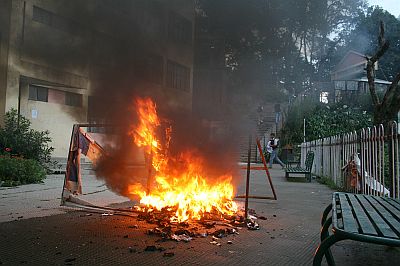 Shimla: At least five students were injured on campus at Himachal Pradesh University when students belonging to Students Federation of India (SFI) and Akhil Bharatiya Vidyarthi Parishad (ABVP) clashed in the evening, today.

District police chief RM Sharma said â€œa case under section 307, 147 of CrPC had been registered and 11 students had been detained. Police was on the lookout for others who have been named in the FIR, he said.

The police official said that some students belonging to AVBP outfit were standing at Summer Hill Chowk, when those belonging to SFI converged onto the spot and started pelting stones and beating them.

In the process five students have sustained injuries and are being sent for medical examination, said Sharma.

On the other hand Communist Party of India (Marxists) have condemned the violence at HPU saying that goondaism in the institution was being fanned by the university authorities and the state government.

It is astonishing that after the police has admitted to a scuffle having taken place between two organizations, students owing allegiance to SFI have been arrested, whereas the others have been allowed to move scot free and terrorize common students on the campus, said Tikender Panwar, member secretariat CPI(M).