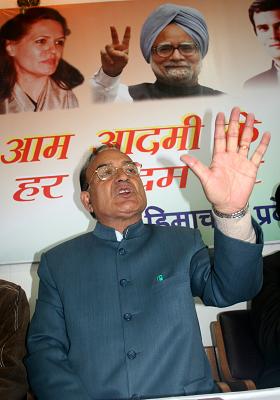 Shimla: Congress has opposed BJP governments move to grant Himachal resident status for anybody who has resided in the state for 15 years saying that it was an blatant attempt to undermine the rights of the state residents.

Kaul Singh Thakur, congress president said that by diluting the resident status, the government was permitting non residents of Himachal to transgress upon protected sale and purchase of agriculture land laws.

Once a non-resident gets a Himachal resident certificate, they would easily purchase agriculture land, which would violate section 118 of the HP Land Tenancy Act, he said.

The Act prohibits all non-resident and non-agriculturalists from purchasing agriculture land in the state.

The congress president said that bestowing a resident certificate on 15 year residents would entitle a large number of people who are engaged in the hydropower sector to claim a state resident status.

Such a provision would harm the interest of residents who have been making a living from agriculture for generations in the hill state, where arable land is scarce, he said.

The state congress chief said that the dual morality of BJP stood exposed as they have now appointed 3 chief parliamentary secretaries, something which chief minister Prem Kumar Dhumal and party incharge for state, Satpal Jain had vehemently opposed when they were in the opposition.

â€œNot only did they agitate the matter but also had gone to court and had the appointments overturned,â€ said Kaul Singh.

What circumstances stand changed now that BJP government has resorted to the very same appointments, he said?

The congress leader said that the law and order situation in the state was deteriorating and there was an increase in number of rape being reported.

Reacting to the governmentâ€™s move to shift the medical collegeâ€™s gynaecology department from Kamala Nehru hospital to IGMC hospital, the congress president said that his party opposed it.

KNH hospital was specifically equipped to handle Gynaecology patients and IGMC hospital is already a crowded institution, where female health care could suffer, he said.

The congressman said that the cabinet expansion done by chief minister Prem Kumar Dhumal had not given proper representation to Scheduled caste members.

National Commission for Scheduled Castes has already pointed out the discrimination being meted out to SC people in the state and the chief minister by not giving proper cabinet representation has blocked a channel where they could redress their issues, said Kaul Singh.