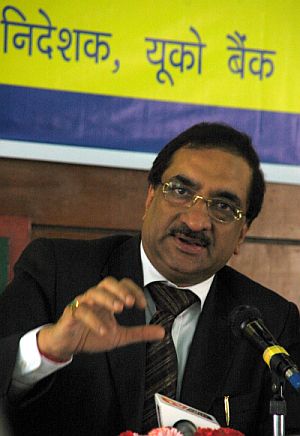 Shimla: While most states across the country struggle to provide financial inclusion to their residents, Himachal has gone a step ahead by not only covering all households under it but by extending financial services it has become the first state to achieve cent percent credit inclusion.

SK Goel, CMD of UCO Bank told the media after hosting the state level bankers meet which was presided over by chief minister Prem Kumar Dhumal that all the 1,080,808 households in Himachal had been covered through credit. There were only 49, 396 households that did not seek to avail any credit facility from banks, he added.

Towards capacity building and empowering vulnerable sections, banks would make 11 rural self-employment training institutes, one in each district, functional within the current financial year. One such institute in Hamirpur has already become operational, he said.

One problem being faced by those seeking employment under NREGA was delay in payments and banks intended to appoint banking correspondents or financial facilitators for meeting banking needs in far flung areas, he said.

A scheme to start bio-metric cards for banking had failed to take off because of the costs involved, said the UCO chairman.

He said implementing the Thorat committee recommendation by making it mandatory to include credit taken against a project by any public or private company in another state to be accounted for in the state where the project is being implemented would significantly improve the credit deposit ratio for Himachal.

Many big projects like JP Associates cement plant, Adani agri-fresh, large hydro power projects and industrial credit in Baddi-Barotiwala-Nalagarh that had taken credit in other states, after being included in Himachalâ€™s account would drastically improve the credit, deposit ratio, said Goel.

Chief minister Prem Kumar Dhumal asked banks to be liberal in providing loans to weaker sections. Against a target of Rs 124.13 crore credits to weaker sections at the 4% interest, banks had provided only Rs. 2.36 crore, Dhumal pointed out.

Speaking in the inaugural session he said that the state was implementing a Rs 353 crore Pandit Deen Dayal Kisan Baagwan Samridhi Yojna for strengthening the farm economy.

The chief minister asked the banks to work for achieving the credit target of financing Rs 5,181.30 crore for current financial year.