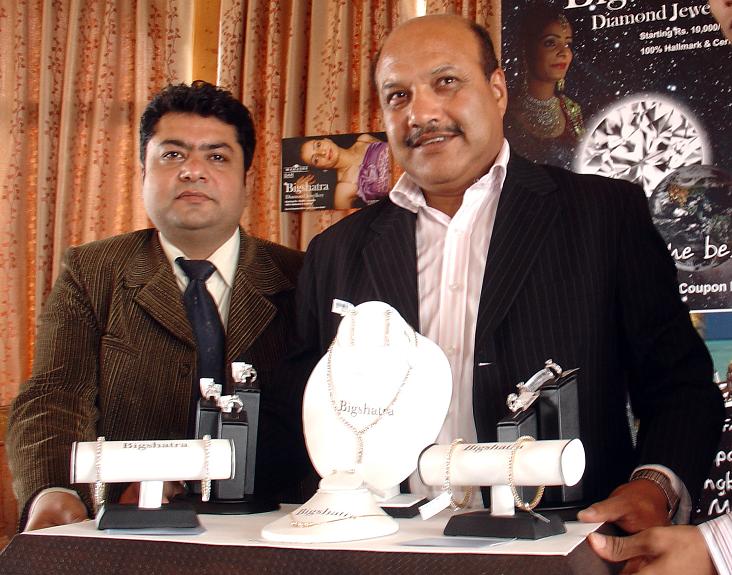 Shimla: As gold prices touch new highs, diamond jewellery has caught the fancy of many and to cash in on the growing demand, Mumbai based SAR Jewels in collaboration with Shimla based Mahashe Jewellers launched BigShatra diamonds in Himachal, today.

Speaking on the occasion Ajay Bhandari, general manager SAR Jewels said that traditionally only the smaller diamonds were sold for jewellery and between them and the solitaire, a huge price differential prevailed which was proving a hindrance for jewellery users who were on the lookout for bigger diamonds.

To fill the gap SAR did a field survey, which was taken back to the drawing room to design jewellery with larger diamonds on it. About 300 such designs had been made and were now being launched in the country starting with Himachal, said Bhandari.

The larger diamonds did not render the jewellery as very expensive as the starting price was Rs 10,000/- he said.

After Himachal, BigShatra diamonds would be launched in other states, he added.

Recession had hit diamond workers in Surat hard but from February onwards there was a revival being witnessed and about 50% of the artisans working on these stones had reported back for work.

The largest consumer of diamonds was US and the economic slowdown there had resulted into a chain reaction here, causing a slump in demand, he said.

Kapil Mahashe, owner of Mahashe Jewellers said that high prices of gold was making many people take to diamond jewellery in the state.

Launch of BigShatra, coincides with an annual exhibition-cum-sale of limited edition of designer jewellery in gold and diamond, he added.

On the occasion Kapil also announced a â€˜buy and flyâ€™ incentive scheme where customers who bought jewellery worth Rs 4 lakh or Rs 8 lakh would be given a paid packaged holiday within or overseas, respectively.

Kapil Mahashya owner of the Show room,and Ajay Bhandair, GM SAR during a press conference at Shimla on Monday.