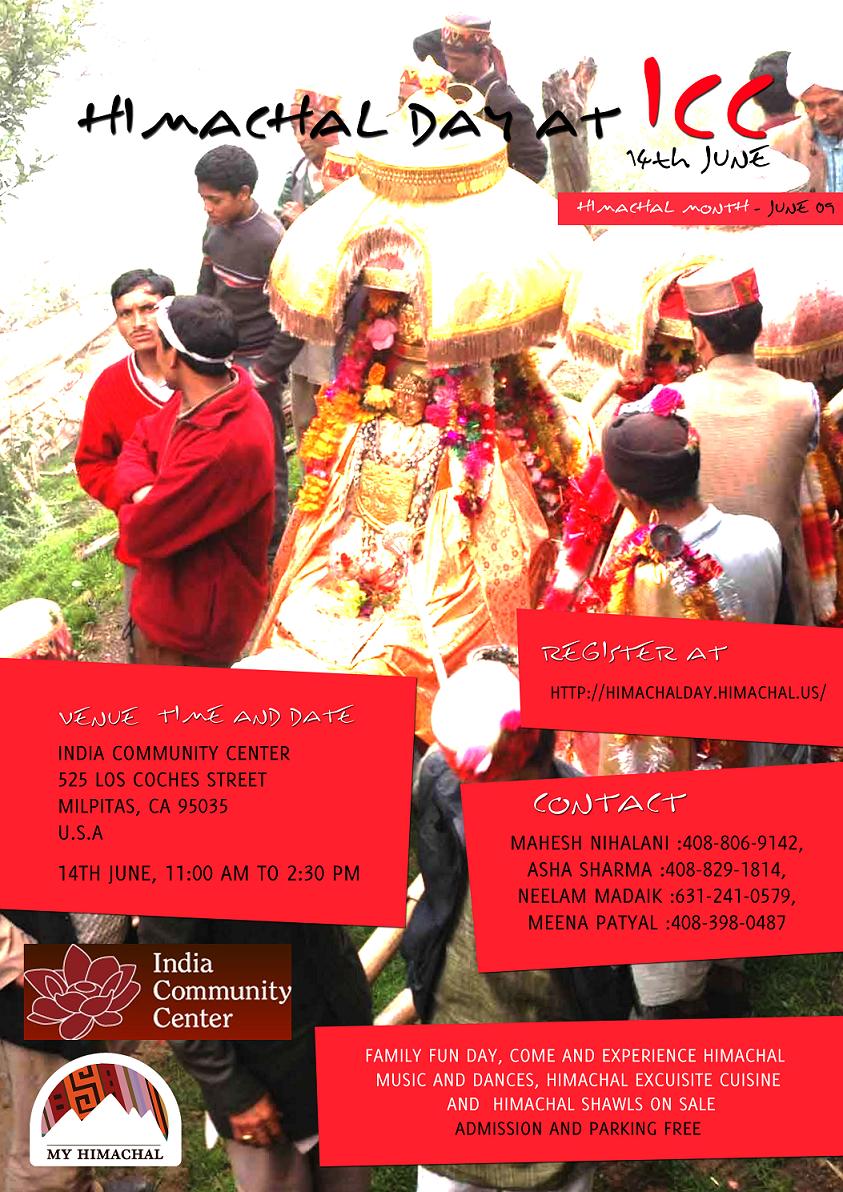 Himachal Pradesh, nestled in the heart of the Western Himalayas in India ,known asâ€™Dev Bhoomiâ€™-Abode of the Gods-is renowned for its majestic snow capped mountain ranges,glorious traditions,beautiful people and colorful costumes and culture.

The local bay area people from Himachal, lead by Asha Sharma,Mahesh Nihalani alongwith Avnish Katoch of â€˜My Himachalâ€™ have come together to organize these festivities.My Himachal is an award winning ,tax exempt (501(c)3) non profit organization made up of people from Himachal and friends of Himachal Pradesh worldwide. â€œOur mission is to preserve Himachal culture,promote,support and expand social and economic interests of Himachal Pradesh and its people worldwide and also help the poorer and deprived residents by assisting in rebuilding their material lives and /or improving their health,living and educational conditions without any distinction of race,religion,sex and opinionâ€ says Avnish katoch ,President of My Himachal.(www.myhimachal.com)

â€œHimachal month/day will be a window to Himachal Pradesh for all the people of the Bay area.It will give them a chance to have a glimpse of the very unique and little known culture of Himachal,preserved for centuries in the shadow of our majestic and beautiful snow capped mountains.â€ Says Asha Sharma.

â€œBesides showcasing our rich heritage and distinct cultural identity,this event will also provide for the very first time a platform for the people from Himachal in the USA to come together as a community.We will also recognize and honor some prominent people of Himachal living in the USA.â€says Mahesh Nihalani,who is also on the Advisory Board of My Himachal.

ICC will have various displays on Himachal throughout June. On Sunday June 14th there will be cultural activities from 11am â€“ 2:30pm.This will be a FREE and open to all public event. It will include a presentation on Himachal followed by lunch featuring authentic Himachali cuisine. There will be cultural dances and music performances and various other activities. There will be information on Himachal including tourism, display of handicrafts and shawls from Himachal will be on sale. The Himachal government in India is also supporting the event by shipping various artifacts from India.

For more information and to learn more on the event Visit: http://himachalday.himachal.us.