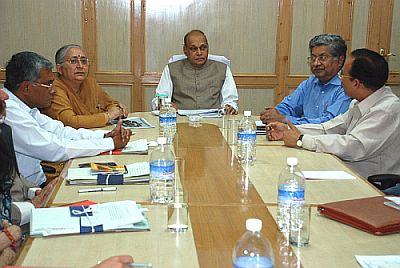 Shimla: With work on Dadri-Nangal gas pipeline in progress, chief minister Prem Kumar Dhumal stated on Thursday that by the year end Baddi-Barotiwala-Nalagarh (BBN) was likely to among the first to be connected with the gas pipeline.

After holding a high level meeting with Lalit Man Singh and BS Negi, chairman and member of Petroleum & Natural Gas Regulatory Board, chief minister Dhumal stated that BBNDA area would be connected with gas pipeline in the first phase through Nangal area of Punjab where laying of the main gas pipeline was in progress.

The State would be creating a complete corridor to identify the areas where piped gas facility would be created especially for commercial use. This would save over consumption of electricity and other fuel charges besides contributing significantly towards protection of the industrial environment, he said.

Possibility of extending the pipeline to Bilaspur and beyond would be explored for the cement units at Darlaghat and Barmana would stand benefited, said the chief minister.

A network of CNG fuel stations, along the passage connecting Punjab, would help to facilitate introduction of CNG fuel transport in the area.

There were about 3,000 trucks moving in and out daily, ferrying cement, clinker and other material, which were contributing heavily towards pollution in the area and with incorporation of CNG fueling facilities, it would get reduced substantially.

Besides Baddi-Barotiwala-Nalagarh, plans were being drawn to connect Kala-Amb, Paonta-Sahib and Nahan area with a pipeline from Ambala. The Una industrial and township was proposed to be connected by extending the pipeline from Nangal.

Domestic consumers in the surrounding areas would be automatic beneficiaries, said Dhumal.