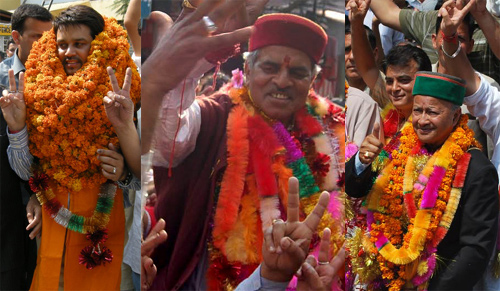 Shimla: Long awaited election fray has finally come to an end. Though in the country Congress has won majority of Parliamentary Seats in comparison to others whereas in Himachal Pradesh voters have sprinkled lotus in three Parliamentary Constituencies out of total four. Yes, Bharatiya Janta Party (BJP) has won in Hamirpur, Shimla and Kangra.

Anurag Thakur, the present member of Lok Sabha from Hamirpur was elected MP again by a margin of 72732 votes from his nearest rival Narinder Thakur of Indian National Congress. Out of the total 698739 polled votes Anurag Singh Thakur of BJP got 373598 votes, Narinder Thakur of INC got 300866 votes, Pankaj Katna of Shiv Sena got 1286 votes, Mangat Ram Sharma of BSP got 11774 votes, Raj Kumar of Rashtravadi Sena got 1216 votes, Malkiat Singh of Rashtriya Raksha Dal got 1167 votes, Rajender Sharma independent candidate got 2607 votes and Sandeep Sharma, independent candidate polled 6225 votes.

Virender Kashyap has been elected Member of Parliament from Shimla Constituency with a margin of 27327 votes from Dhani Ram Shandil of Indian National Congress, his closest rival. Others who could bag some votes were Som Nath (BSP), Gurnam Singh (SP), Brij Lal (Shiv Sena), Roop Ram (Independent) and Shurvir Singh (Independent); and the number of votes were 8160, 2120, 2069, 3510 and 6254, respectively.