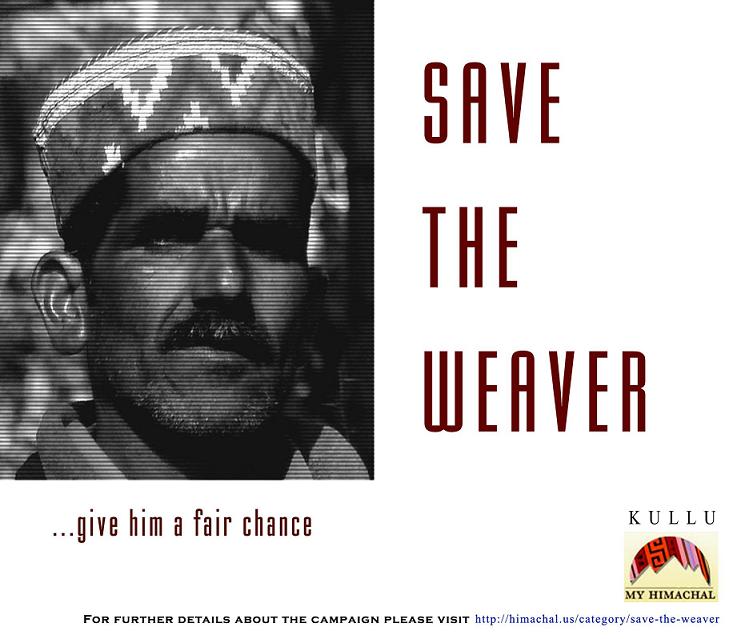 In a significant development, My Himachal an NGO with the help students of S.P.Jain Institute of Management and Research, Mumbai has come up with proposed implementation plan to revive the crumbling Kullu Handloom Industry. It is in fact, now in the hand of state government to take the plan seriously and try to do something concrete to save this age old art.

Ironically last year too, My Himachal with students of same institute had found out the reasons behind tottering weaving industries and suggested the ways out. A NGO-students deputation met concerned officials and minister over the matter and even handed over their findings to the CM.

A free health insurance was extended to all weavers in the valley soon after the deputation met CM. However going by the present deplorable condition of industry, these measures will not be able to survive the art. The certain steps are required, without which the art may become a thing of past.

Pooja Adiga and Ajay Simha the students of Institute have chalked out a revival mechanism for this industry. The co-operative societies, who are involved in the making of authentic hand woven Kullu shawls, should be registered with the buyer. The terms and conditions can be mutually agreed upon and are then they allow showcasing their products on the websites, the students point out. Currently, Bodh Shawls and Ganapathi Co-operative have expressed an interest in this venture. The students are also in the process of identifying other interested co-operatives by seeking help from bodies such as HIMBUNKAR. The certain parameters such as quality check and supply-demand equilibrium are currently being looked into. The proposal is that, My Himachal shall do the quality check before the products are being shipped out to their respective locations, besides ensuring a steady supply of goods throughout the year.

The benefits of such a plan are immense, feel Pooja and Ajay. On the supplier side, it opens up untapped markets and multiple marketing channels to the co-operatives. It creates sustained demand and gives them access to latest consumer trends. Also, it brings in a much needed work ethic and most importantly boosts the current state of the industry. On the buyer side, it gives them a First Mover Advantage (access to authentic hand woven products that have the finest quality and finish) and also leads to increased revenues at minimal costs, since the setup is already there. It also greatly enhances their existing brand image whilst boosting their CSR initiatives.

The major hurdles in this are power loom players, lack of awareness amongst weavers and co-operatives, lack of a progressive attitude, lack of proper implementation of the GI and the handloom mark as well as ineffectiveness or the lack of government policies.

To annual the impact of these obstacles, major stakeholders in this industry like government, bodies such as HIMBUNKAR need to be get involved actively. In association with the Tourism Department, a mechanism should be setup to invite private players into this market. Apart from privatization and increased market accessibility, there are many other things that will also ensure revival of this industry. Important amongst them is product diversification. The success of privatization would eventually lead to this, but it is important for suppliers to diversify their existing product portfolio to cater to a larger base of consumers. Access to latest consumer trends would help them create / obtain better designs for their products, and here again, the govt can ensure access to both.

The Geographical Indicator (GI) for Kullu shawls that was approved in 2006 hasnâ€™t moved much since. The GI would go a long way in preventing cannibalization from power loom players thereby setting the base for the revival.

GI can be a lifeline for Kullu shawl!

GI is a name or sign used on certain products which correspond to a specific geographical location and origin. The use of a GI acts as a certification that the product possesses certain qualities, or enjoys a certain reputation, due to its geographical origin.

GI has proved to be very valuable as it identifies the source of the product and is an indicator of quality. It highlights the peculiar qualities of a product, which are due to human factors, such as specific manufacturing skills and traditions. GI can be life saviour for gradually dying art. Yet, the imitations stuffs have not only flooded the market but also offer whopping discounts to tourists. GI, if implemented, prevents sale of non Kullu shawls. It also prevents proprietors from using the name â€œKullu shawlsâ€ if they are produced outside of the defined geographical territory of Kullu valley. It is interesting to note that unauthorized shopkeepers or producers cannot even use sign boards/hoardings of selling Kullu shawls. In the event of anyone found selling fake shawls, a huge penalty will be imposed on them or imprisonment of 6 months to 3 years or both under the GI Act of 1999.

The KSWA took the initiative and registered Kullu Shawl as a GI in 2006. Ever since, there has been slow progress on the implementation. The registration has an expiry period of 10 years before it has to be renewed again, of which 3 years are already lost trying to get things implemented.

The logo, which is a representative of Kullu shawls as a GI, is yet to be finalised and this has largely due to the miscommunication between the Department of Science and Technology and KSWA. Also, the KSWA hasnâ€™t got adequate resources even to set up a working office in the valley and has applied for funds which have to go through the layers of bureaucracy and red tape at the government level.

The major retailers of the state have a lot to lose if the GI is implemented because they cannot sell just any shawl as a Kullu shawl to the guileless tourist. And because of this there is an underlying, subtle resistance to the implementation.

Over the last 3 years, the government, despite its best efforts hasnâ€™t been able to do much in this regard. But the problem here does not lie in a lack of effort, but it lies in a lack of â€œchannelizedâ€ effort. The government must appoint an independent person to look into this matter immediately.