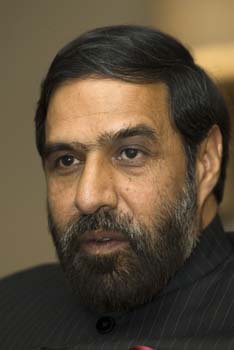 Anand Sharma a Rajya Sabha member from Himachal and former Minister of State for External Affairs has been picked by Dr. Manmohan Singh in his newly formed Cabinet as Minister for Information and Broadcasting.

Born in Shimla January 5th, 1953, Sharma has been a prominent leader of the student and youth movement in India. He was one of the founders of NSUI, the student wing of the Indian National Congress.Sharma was President of the Indian Youth Congress in 1985 and was first elected to Parliament in 1984 at the age of 31.

Sharma was Chief Spokesman of Congress party for six years and was elevated to the Union Council of Ministers with responsibility for Foreign Affairs in January, 2006. He also assumed the additional charge of Union Minister of State for Information & Broadcasting in October 2008.

Mr Sharma is recognized for his personal commitment to the struggle against Apartheid in South Africa. As President of the Indian Youth Congress, he was instrumental in convening an International Youth Conference against Apartheid in New Delhi to commemorate the 75th anniversary of the African National Congress in January 1987. In addition to being Chairman of the Indian Anti-Apartheid Movement, he also chaired the World Youth Action Against Apartheid. He was appointed to observe the South African Transition Process and Elections in 1994 by the Commonwealth Secretary-General.

Anand Sharma was proactively associated with the convening of the International Conference, as its Secretary General, to mark the centenary of the Satyagraha organized by the Indian National Congress in New Delhi in January, 2007. The Conference was attended by representative leadership delegations from 91 countries and 122 organisations. In pursuance of the Conference declaration, he moved Indiaâ€™s Resolution, co-sponsored by 142 member-states, at the UN General Assembly on 15 June 2007, to observe Mahatma Gandhiâ€™s birthday on 2nd October as the International Day of Non-Violence. The resolution was adopted unanimously by the UNGA.

Anand Sharma is a lawyer by education and is well-conversant with parliamentary and legislative procedures and as a member of the panel of chairpersons for Rajya Sabha has presided over sittings of the House.

Sharm is married to Dr. Zenobia Sharma, they have two children.