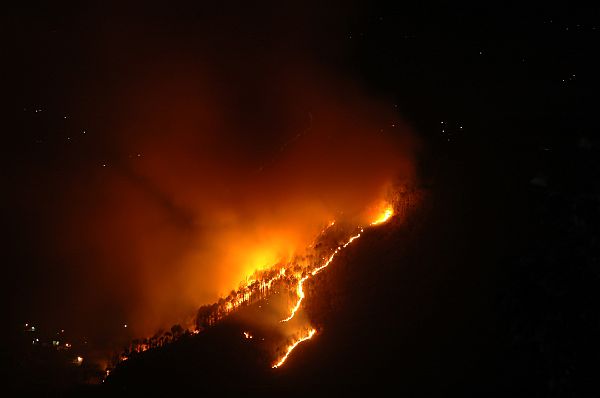 Shimla: Rising summer temperatures spell trouble for the states precious forest cover as scores of fires are being reported from various regions even as authorities grabble with ill equipped manpower to put the raging infernos.

A smoke haze engulfed the capital as fires in neighbouring jungles raged on. Taking stock of the situation, forest minister JP Nadda readied â€˜rapid response teamsâ€™ both at forest ranges and divisional headquarters to timely tackle the fires when reported.

â€œThese teams have been able to contain several infernoâ€™s,â€ he says, â€œand are proving effective in management of summer forest fires.â€

Conservator forest fires office located at Bilaspur reported that between 25th March to 15th May as many as 576 forest fires have been recorded across the state. The area affected by them is estimated to be over 6902 hectares of forestlands. Losses were being tabulated.

â€œThe department has taken several preventive measures,â€ said Nadda, â€œbut we need cooperation from forest right holders and others living around forests to maintain vigilance as well as assist in putting out fires wherever they occur.â€

The summer heat renders pine forests and dry pastureland more vulnerable to fires as which can spread very fast once an accidental or deliberate flame is lit in the area. Out of an geographical area of 55,673 square kilometres, the state has 37,033 square kilometres (66 %) as forest area.

Despite deploying rapid response teams, the firemen are not properly equipped to fight wild fires in difficult hilly terrain because of constraints about mobility, says Sukru, a forest worker.

With community participation in the activity waning, Rajesh Thakur, a resident of Shoja in Kullu valley who lives close to a forest says, â€œwith authorities keeping natives away from the forests, and courts having stalled their century old timber rights, the people are pitched against the foresters, leaving them with the job of containing forest fires.