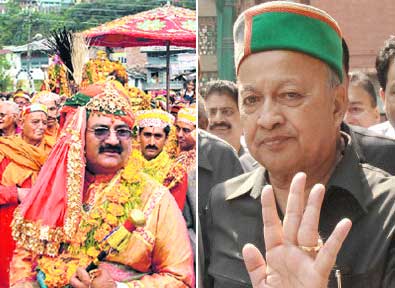 Shimla: Princely rivalry simmering from colonial times between the royal houses of Bushair and Kullu has been re-kindled onto the electoral arena as the scions of both erstwhile states face each other in Mandi parliamentary seat for the first time.

Former chief minister Virbhadra Singh, of Bushair royal house, filed his papers as the congress candidate before Onkar Sharma, returning officer for Mandi on Thursday (April 23), with much fanfare.

Marking it as a show of strength, thousands of people assembled to take the candidate in a procession for filing of the nomination papers.

In the 14th Lok Sabha, the seat was held by Pratibha Singh, wife of Virbhadra but has declined to re-contest, paving the way for her husband to test his 17 years chief ministership legacy in the election round.

To match him, BJP â€“ the ruling party in the state, has fielded old war horse Maheshwar Singh, scion of the Kullu royal house.

Adding a tinge of the sickle and hammer into this royal battle, Communist Party of India (M) has pitched in with farm leader Onkar Shad as their candidate.

Taking the elephant into battle, Bhaujan Samaj Party too has put up a candidate for the seat to complete the repertoire of leaders eyeing to represent the 350, 667 households which account for 11,11,787 voters in Mandi constituency.

Other than the two royals contesting, at stake is the leaderships of two Thakurs, Kaul Singh and Jai Ram, who are party presidents of Congress and BJP and represent Darang and Chachiot assembly segments which are parts of Mandi parliamentary seat.

â€œBJP is on strong footing as our representatives were elected on 13 of the 17 assembly segments in Mandi seat, just 14 months ago,â€ chief Jai Ram Thakur told My Himachal News. “We will wrest the seat from congress, he asserted.

Thakur Kaul Singh holds that congress would win the seat comfortably calling it the party ‘stronghold’. â€œIn Virbhadra Singh we have a formidable candidate, who has been the longest chief minister in the state. He is a sure winner,â€ he says.

Having got a reprieve in a 13 year old telecom scam case from the Delhi High Court, former communication minister Sukh Ram is a leader much in demand in Mandi.

He has represented the seat in parliament on three occasions and the 82 year old leader still hold tremendous influence in the constituency.

The aging leader in the past has blamed fellow congressmen including Virbhadra Singh for his troubles with CBI investigations that unearthed the telecom scam. Sukh Ram has dropped hints that he may be unable to campaign because of his problems with the law .

Delimitation has altered the geographical profile marginally, with Manali â€“ a newly created constituency being included and Dharmpur sliced out and added to Hamirpur Lok Sabha seat.

Males voters numbered at 5,66,507 outstrip women who have 5,45,280 votes in the seat. Of the 17 assembly segments in the constituency, Bharmaur, Lahaul-Spiti and Kinnaur are tribal seats located in the high altitude trans-Himalayan zone.

Maheshwar has won three elections in 1989, 1998 and 1999 and is facing the formidable former chief minister for the first time.