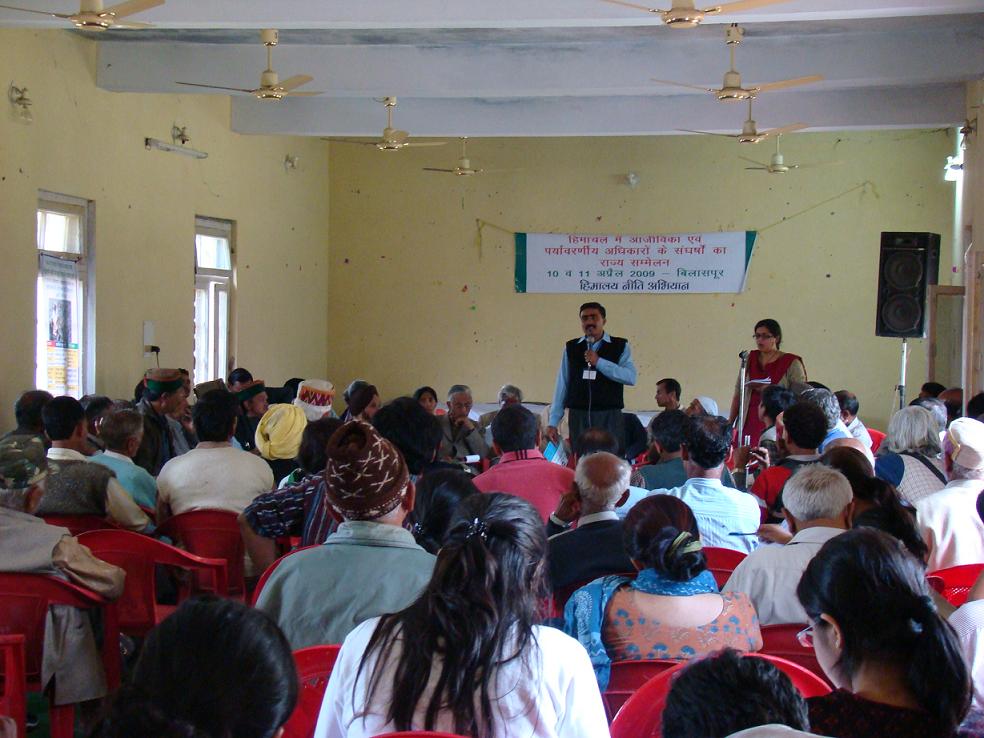 Shimla: In the din of elections, environmentalists have converged to draw attention of political parties towards issues confronting livelihood patterns that are getting affected by global warming, displacement of people because of construction of large projects and because of land acquisition laws.

Participating at a two-day Save Himalaya conference-cum-demonstration at Bilaspur, noted environmentalist Medha Pathkar choose to draw attention to the plight of Bhakra Dam displaced people.

â€œCourts and governments justify displacement for setting up big dams and cite Bhakra as an example about how local communities stand benefited but reality of the dam affected is shocking, which rest of the country needs to know,â€ she said.

â€œBhakra Dam â€“ the countryâ€™s first â€˜modern templeâ€™ has only tales of sorrow to tell,â€ said Pathkar, as people displaced over six decades ago narrated their ongoing struggle for a dignified living.

RS Negi of the Kinnaur Him Lok Jagriti Manch in his presentation highlighted how power companies with tactical support from governments were grossly violating tribal laws in a region that has scare arable land.

Guman Singh, convener Himalayan Nithi Abhiyan called for a concentrated bid from all environmentalist bodies to stall polices that encroach upon natives rights, displace them and damage the environment.

Gagret based Narinder Parmar of the Matru Bhoomi Sangarsh Samiti where a SEZ is proposed said that the residents were not willing to part with their ancestral lands. He said 14 villages face displacement should the special zone come up.

Opposing the large scale Himalayan Ski Village tourism project in Manali, Pushpal Parmar said that the such large tourism project were harmful and was being resisted by the valley residents who had even held a conclave of local Devtaâ€™s to mark their opposition.

Hundreds of people affected by dams, mines, river diversions, urbanization and large industry project have assembled at Bilaspur who along with environmentalists are to prepare a peopleâ€™s manifesto to be presented to political parties. The conference held specific sessions on displaced people, large hydro power projects, SEZâ€™s and Himalayan Ski Village

Major issues pertained to rehabilitation of Pong, Pandoh and Bhakra Dam displaced people, scrapping of the Land Acquisition Act, 1894; evaluation of environmental and social impacts of hydro-power projects, scrapping of the SEZs and special tourism zones, a complete halt on mining and mine-based industries and strict implementation of Section 118 of the Himachal Land Reforms Act.