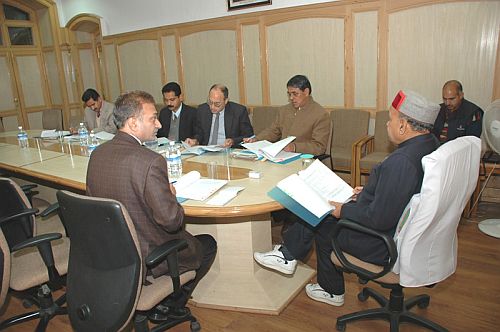 Shimla: Himachal Pradesh government is looking for possibilities to market its handloom and handicraft products in Indian Premiere League (IPL) cricket matches to be held in Dharamshala.

Presiding over the 143rd Meeting of the Board of Directors of HP State Handicrafts and Handlooms Corporation, Himachal Chief Minister, Prof. Prem Kumar Dhumal, said that for the first time the Himachal Pradesh Cricket Association time got an opportunity to hold a big event like the IPL matches, which could be rightly availed for marketing its handicraft and handloom products to the cricket lovers with large number of retail outlets of souvenirs and other gift items which will be set up in and around the cricket stadium premises during the four proposed IPL matches at Dharamsala.

He also said that the chain of HP Tourism Development Corporation hotels could be utilised for opening retail outlets of the Handicrafts and Handloom Corporation products which would not only acquaint the visitors with the traditional Himachali gift items but also generate demand for the same thereby providing employment to the rural artisans on the one hand and preserving the traditional art and craft on the other hand.