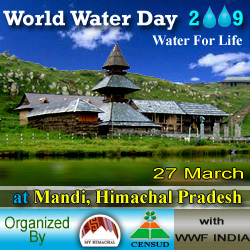 Shimla: CENSUD and My Himachal is all set to celebrate World Water Day on 27th March, 2009. You are cordially invited to the function which is duely to be held at Mandi, Himachal Pradesh.

Importance of freshwater: Role of Local Communities for conservation and wise use of natural sources and management strategies is the theme of the function.

The two part Programme will begin at 10:00 am and includes:

Group discussion, feed back, evaluation and presentation by the group leader

Mandi has many Ghats along river Beas with lot of religious and cultural significance. These ghats are deeply interwoven in the religious culture of Mandi. But due to coming up of Pandoh Dam at a distance of about 20 Kms upstream Beas river these ghats have dried up and are dying slow death because of encroachment. The traditional sources of water like Bawadis have also dried up because of neglect and disuse. Its time to act before itâ€™s too late.