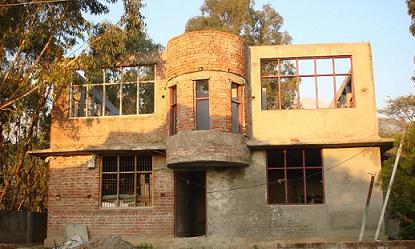 PALAMPUR: Tourism which is considered as life line of this hill state and also play significant role in the economy of the state is facing rough weather, thanks to the apathy of the state government which has always given low priority to the tourism industry here. It is a fact that little attention was paid for planned development of the tourism in the state in past fifteen years.

Haphazard construction of hotels, dhabhas (small restaurants) and log huts on road side has become quite common. It seems that there is none to check such construction in the state and no government exists here. Most of favorable and attractive tourist stations has already turned into slums. There are problems like disposal of garbage, contamination of water and large scale soil erosion because of unplanned construction of hotels and other buildings.

Although the state government has time again announced to come out with a master plan for the development of the tourism in the state but till today every decision of the government is confined to files. It is a sad state of affairs that nothing worthwhile was done for the promotion of this industry in the state and the government put much stress on the building of hotels in Simla, Manali and other places creating concrete jungles.

H.P. Tourism Development Corporation , (HPTDC) which plays vital role in the expansion and development of tourism in the state has failed to deliver goods. Number of hotels belonging to H.P.T.D.C. is in bad shape. It is evident from the fact that posts of MD tourism and Director Tourism was lying vacant for the past six months. None in the government is bothered to fill up these posts.

The previous government has taken up construction of number of new projects in the state but in the absence of adequate funds, number of building has been left half done. The expansion of Neugal Cafe at Palampur has also come to stand still. The corporation had already spent over Rs. 25 lakh on this project.

Tall promises were made to provide better amenities to the tourists visiting the state, but nothing was done. What welcome the tourist here are bumpy, narrow roads, costly hotels, poor parking facility and heavy taxes (entry and toll taxes). The decision of state government to start metered taxis in the state remained confined to papers only.

Tourism in Himachal Pradesh has still a long way to go to catch up with the front ranking states in this field. It is an established fact that promotion of the tourism in Himachal Pradesh is essential for its faster development, because of the fact that tourism industry can fill the coffers of the state since it is an important revenue earner and also a major source of foreign exchange. Himachal Pradesh has enormous tourism potential. It matches Switzerland in its scenic beauty and climate. Snowcapped peaks of majestic Himalayaâ€™s ranges are a visual treat. The lush green Kanagra valley and sprawling tea gardens situated in the foot hill of Dhauladhar Ranges are things of beauty which give joy for ever.

A large number of tourists, both international and domestic, are attracted to natural parks and sanctuaries which offer them glimpse of wild life. Mountains, jungle, rivers, lakes also allow for the new fangled â€œadventure tourismâ€ hiking skiing and other similar activities.

Tourism and environment are intrinsically related with each other and expansion of tourism depends on clean environment. But in Himachal Pradesh the state government has absolutely forgotten this important aspect. In past the government had allowed the setting up of six big cement plants and hydroelectric projects in the state adversely affecting tourism industry here. Deforestation , large scale soil erosion and unscientific mining have further put question on the future of tourism.