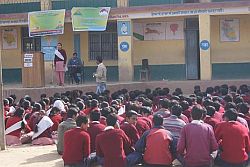 In a series of declamation contests organised by CENSUD in association with My Himachal a declamation contest was structured at GSSS Bhangrotu and GSSS Pangna in district Mandi of Himachal Pradesh on Wednesday. Earlier similar competitions were organised under CBAI Project at Jogindernagar, Nerchowk, Gohar, Drang, Urla and Makriri.

Students enthusiastically participated in Declamation on RTI (Right to Information) organised at GSSS Bhangrotu. Presiding over the function school Principal Sheela Kaisth appreciated the efforts of My Himachal and Censud in spreading awareness about Right to Information Project as it can empower people bringing about the true democracy. Dhaneshwari Devi was adjudged 1st while Neha and Urmila were adjudged 2nd and 3rd respectively.

Prem Singh coordinator of the programme requested students to spread a word about RTI and keep a check on the functioning of govt. bodies so that the needy people get the true benefits of govt schemes.