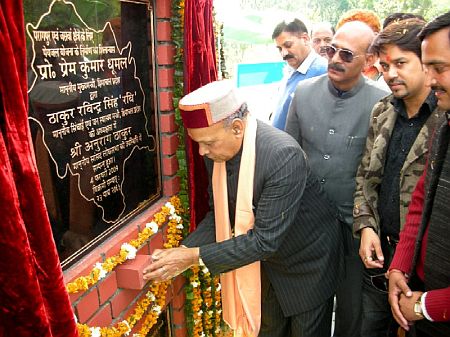 Shimla: After laying the foundation stone of ambitious Rs. 39.23 crore Drinking Water Supply Scheme at Village Much Kund Mahadev of Beehan Panchyat of Pragpur Block, Kangra; Prof. Prem Kumar Dhumal proclaimed that a sum of Rs.165 crore was being spent on drinking water and irrigation schemes in Kangra district during current financial year out of which Rs. 54 crore would be spent on rural drinking water and Rs.105 crore on execution of different irrigation schemes. He directed the PWD for preparing DPR for the widening and improvement of Chintpurni-Talwar road. He also sanctioned Rs. 80 thousand for the construction of cremation site at Beehan Panchyat. He also announced Rs.03 lac. for community hall at Much Kund Mahadev complex to facilitate the pilgrims and also announced construction of boundary wall under NREGA.

Dhumal ruled out all the criticism being carried out by the opposition regarding discrimination with Kangra district in which he managed to bring the Central University, NIFT, Disaster Management Battalion, Food Craft Institute, Consumer Tribunal, SAIL Plant and many such prestigious institutions and said present govt. is dedicated towards the speedy development of the region irrespective of any criticism.