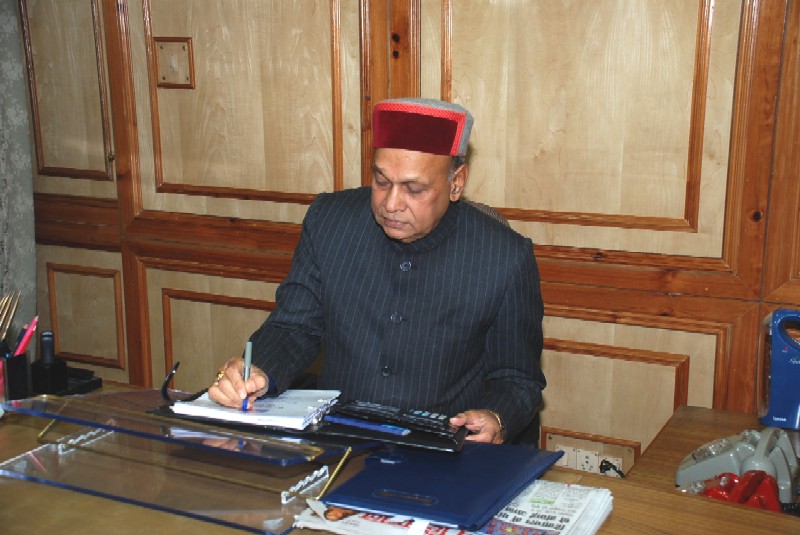 Dhumal, who is also the finance minister, in his second budget of the term pegged the 2009-10 annual plan at Rs 2700 crore, which is 12.5 percent higher than last year, even though it is yet to get approval from the planning commission.

A higher allocation that what was budgeted for in 2008-09 realised under the 12th five year plan turned a Rs 19.21 crore deficit budget into a surplus one with revised estimates.

Against an expenditure of every 100 rupees, total revenue receipts are Rs 80 and the remaining comes through loans.

To boost tourism, Asian Development Bank (ADB) had in principal approved a Rs 350 crore project. This project would devolve to the state as 90 percent grant and 10 percent loan form the central government, he said.

Likewise, the state had signed an agreement for Rs 4000 crore funding with ADB for harnessing additional hydropower. The loan would come as Rs 3600 crore as grant and the remaining as loan.

In his one hour budget speech, the chief minister highlighted launch of the Rs 353 crore new agriculture scheme “Pandit Deen Dayal Kisan Bagwaan Samridhi Yojana”, funds from which would be used for expanding poly house cultivation in a large way and for crop diversification to improve farm incomes.

Plan outlay for roads has been increased to Rs 480 crore, which is a good 58 percent higher than the Rs 304 crore that was allocated last year.

Public transport fairs, which were hiked by 25 percent last April to ward of the impact of increased oil prices have been reduced by 10 percent as prices of petroleum products have since fallen. Dhumal said that since the fuel prices are still higher than what they were when a tariff hike was announced last year, only a 10 percent reduction in fares was possible.

Of the Rs 182 crore allocated for drinking water schemes, Rs 172 crore has been marked for three major projects in Bilaspur and Kangra district. These schemes would provide drinking water to 1171 habitation, the chief minister said.

VAT on CFL bulbs, Ghee and unbranded soaps has been reduced from 12.5 percent to 4 percent.