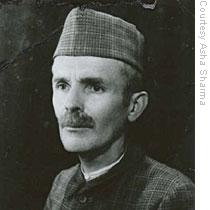 Apple growers in India’s Western Himalayas still remember Samuel Evans Stokes, the American who brought the fruit to their land a century ago. Stokes went to India to teach and ended up staying there to learn. Stokes’ granddaughter tells his story in a new book, An American in Gandhi’s India.

Asha Sharma was a child when her grandfather Samuel Stokes died in 1946, so she didn’t know him well. But over the years, she learned more about him and became fascinated with his story.

“Samuel Stokes belonged to a very distinguished family of Quaker heritage,” she says. “His first American ancestor, Thomas Stokes, had come to Philadelphia in 1678. When Sam was about 20 years old, he decided to go to India and work in a leper home in Simla Hills. He joined some missionary activity. His parents, of course, were worried that he would get leprosy and never return. But he was determined to go.”

Johnny Appleseed of the Himalayas 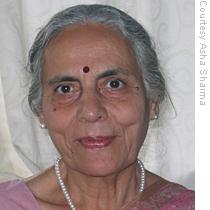 So, in 1904, Stokes arrived in India and started working in that leper home in the Himalayan foothills. He quickly realized that the people there needed help to fight not only disease, but poverty as well.

“In 1916, he brought the first apple trees from Philadelphia to the Simla Hills. He distributed them [the apple seeds] free to the local people and helped them to plant and nurture them. That was a start of an economic revolution in that area.” 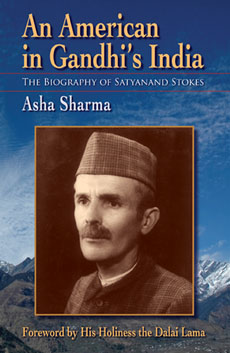 “An apple tree takes about six to seven years to grow,” she says. “And he would tell them to grow the apple trees, and they would say, ‘If we plant the trees, where will we grow our food crops? And what will we eat?’ It was a battle for him in the beginning, but he succeeded and gradually the people began to grow apple trees. That’s why he’s called the ‘Johnny Appleseed of the Himalayas.’ And people still remember him for that.”

Tragedy inspires Stokes to join independence movement
What many people don’t know, though, is that Stokes had become an active member of the Indian Independence Movement, even writing a series of newspaper articles advocating the country’s freedom from foreign domination.

“It was the incident of April 1919 [The Jallianwala Bagh’s incident in Amristar in the Punjab], when there was indiscriminate shooting of about one thousand people in a garden in Punjab. That’s the time that Stokes saw the violence against the Indian people and decided to join the Indian National movement. He became very active in the Punjab. He became a member in the Punjab Provincial Congress Committee. 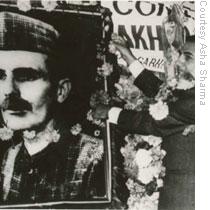 “Then, of course, he became close to Mahatma Gandhi. Whenever Mahatma Gandhi had any important meetings, he would invite Stokes. Stokes was a signatory to some of the very important manifestos of those times.”

As an outspoken independence advocate, Stokes had to pay the price for what he believed in, Sharma says.

“He was arrested and put in prison for six months. He refused to be treated like a European,” she says. “You know in those days, there was a separate ward for the Europeans and a separate ward for the Indians. But he said, ‘I don’t want to have special treatment.’ Buy, anyway, he did that six months of jail sentence in Lahore, and I think that was a highlight of his life, something he was very proud of.”

Commitment to India both political, personal

That passion for equality extended to Stokes’ personal life. 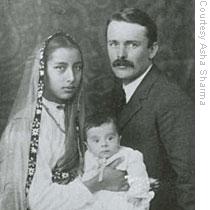 “When he decided to get married, he chose to marry an Indian as proof of his belief in racial equality,” she says. “When he married, he said, ‘I married an Indian. I want to live in India so my children should be raised as Indians and not as Anglo-Indians.’ He gave his children all Indian names. He had seven children. One died. My mother was his eldest daughter.”

Sharma says her grandfather was a prolific writer. His journals, books and correspondence with family members and friends were a great resource as she began to write about his life. What fascinates her most, she says, is how her grandfather came to India to teach people about Christianityâ€¦ and ended up staying, becoming a Hindu, and studying Indian languages and philosophies.
“I think he was really touched by the simplicity of the Indian people,” she says. “It is the openness of the Indian society and the acceptance; I think that is what makes a difference, the culture, which is thousands of years old. Those kinds of things when people go there, you welcome whoever comes to your home. 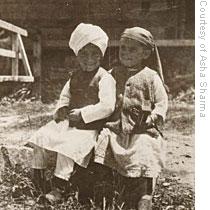 You’re kind. You’re tolerant. You’re accepting, and you’re simple. Those the things, I think, which are valuable. It’s mainly the feeling of universalism that attracts people.”

Sharma says she hopes An American in Gandhi’s Land will keep Samuel Stokes’ legacy alive. She’d like her grandfather to be remembered as a champion of freedom and equality and, of course, as the man who introduced the American Delicious apple to the Himalayas.

With kind premission from Asha Sharma, via Voice of America.