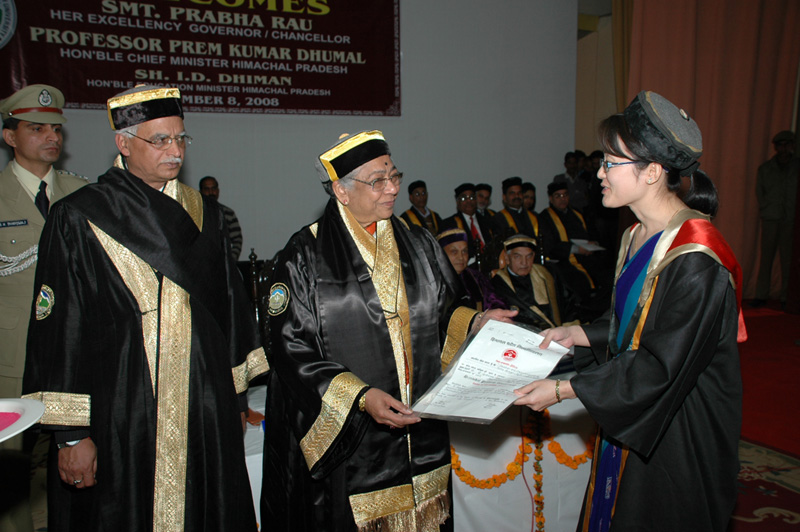 In her address on the occasion, she emphasized the need to evolve a system of education that focuses on the mission of transforming societies into more wholesome environment for human, social, moral and spiritual habitation. She said that global economic and technical competition, global warming, crumbling physical infrastructure, energy and fuel scarcity, unprecedented diversity, increased fiscal deficits and amongst all, a public education system, were the major challenges before the coming generation. She said that there was a section of society crumbled under poverty and discrimination that still existed in the society, which needed to be removed and their talents put to work for their own and society’s betterment.

Governor said that authentic and empowering education, pushes one, past the boundaries of the ordinary and the conventional so that one could experience the world with fresh eyes, ears and willing hearts, generating a new vision for the future alongwith the energy and joy that allows to transform the world around for the better. She called upon the awardees to muster courage to nurture a vision for a more just and sustainable world and to turn the same into reality in their future endeavours.

Prof. Prem Kumar Dhumal, Chief Minister in his Convocation address said that Himachal Pradesh Government would be planning to develop Special Education Zones (SEZ) in collaboration with renowned International Universities to impart world class vocational education to youth in emerging disciplines like Information Technology, Bio-Technology, Pharmacy and allied technologies etc. He said that there were five principle goals of higher education, which included Access, Equity, Quality, Relevance and Promotion of Social Values with special reference to Himachal Pradesh. He said that in order to achieve the goals, the higher education had to be relevant as well as of high quality exuding excellence in its products comparable to international standards. He said that the issue of Promotion of Social Values as a goal of higher education was also dependent upon the relevance and quality aspects of the system. He said that if the higher education could ensure and maintain relevance and quality, the objective of promoting social values was expected to be realized. He emphasized the need for bringing about change in the educational curriculum and introduce the same based upon the emerging requirements and trends in the education which could help students secure their future and career opportunities. He gave a clarion call to the teaching fraternity to contribute effectively to strengthen higher education to produce competent and productive human resource. He emphasized need for achievement of the objective India: Vision 2020 in real sense.

Prof. Dhumal said that it was motivating to know from the national survey reports that Himachal Pradesh had 20 percent college going students compared to 10 percent at the national level. He said that credit goes to the vast educational infrastructure created to cater to quality educational needs, which includes primary schools within a walking distance of 1 to 1.5 kms. in hilly areas and 1.5 kms. to 3.0 km in other areas of the state, covering almost every habitation. He said that the drop out rate at primary stage had also come down to 0.89 percent as also providing a minimum accommodation of at least three classrooms in every primary school. He said that literacy had doubled during last two decades and gender gap in literacy rate had declined from 22.6 percent to 17.5 percent; female literacy doubled from 31 percent in 1981 to 68 percent in 2001 and by the next census of 2011 the same was likely to be cent percent.

Chief Minister said that the vast network of educational institutions includes six universities, 86 degree colleges, 71 teacher-training colleges, 22 sanskrit colleges and 49 other vocational institutions. He said that locations had been identified for setting up of IIT in district Mandi and Central University in district Kangra while recently the ESIC Medical College and Hospital had been approved for district Mandi. He said that a tripartite agreement had been entered into to develop the Swami Vivekanand Medical Research Institute into a centre of par excellence learning in association with private participation. He said that Himachal Pradesh was poised to emerge the ‘Knowledge Hub’ in all respects in coming few years where University teachers were to play leading role.