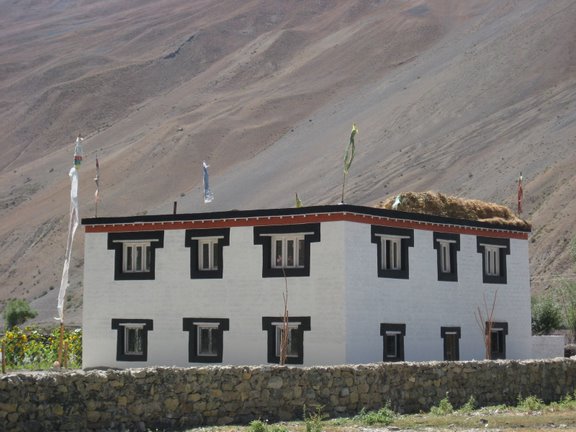 Following morning, I had little tiredness but as soon as I looked out of my window, wow… I was surrounded by those fascinating Tibetan monastery style houses on one side and a huge dusty, rocky mountain on the other side, it was so enormous and barely a kms away from my hotel, I had to completely turn my head up 90 degrees to see it. For a moment, I thought, if this whole thing which looks like mud and sand mountain starts coming down?? Surely, it would have buried me. What rubbish, I immediately stopped my thinking pattern.

Kaza is basically a stop over town for tourist coming from Tabo side and vice versa. It has a small local market, a few guest houses, a taxi stand, a bus stand, fuel station and basically everything else to keep a traveler rolling. 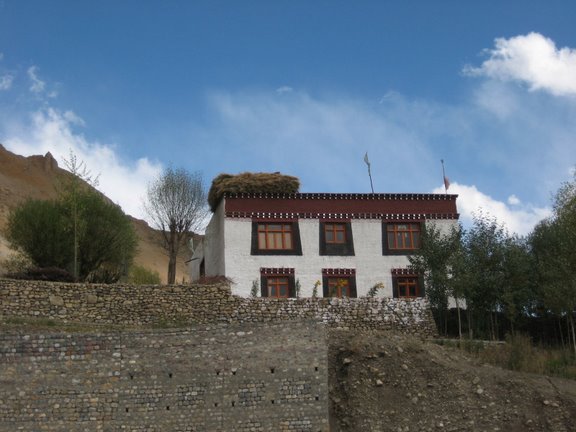 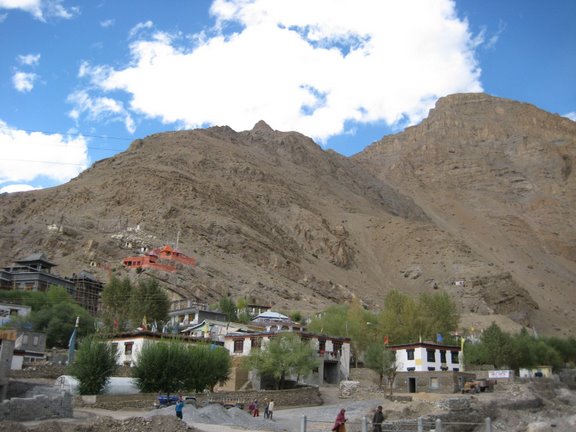 Now, my first priority was to get the tyre repaired. After roaming in the local Kaza market I was told that there is no mechanic to fix the tubeless tyre and the 2nd bad news was, in the whole of Kaza town, I would not get a tube for Scorpio tyre. Shit, I was stuck. But few more rounds into the market and I finally discovered a mechanic near the petrol pump who could fix the tubeless tyre, wow, I was ecstatic like a child. Got the tyre repaired and requested a taxi union manager to get me a Scorpio tube from Manali, he had some vehicles coming up from there. I was told to wait for 1-2 days. However, after waiting for 2 days, I got to know that even at Manali the tube wasn’t available. So, I had to now wear the Indian Jugadu cap, got a Tata sumo tube as a Jugad for the time being. 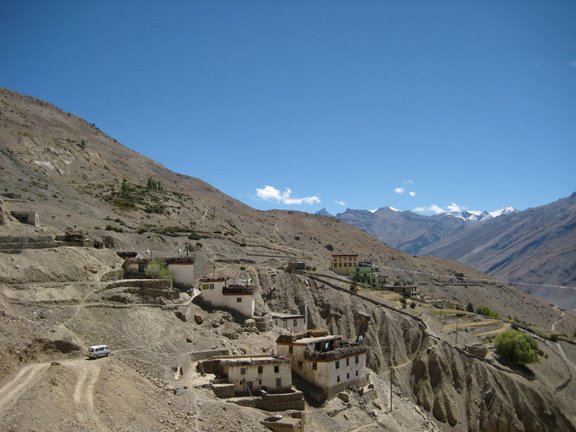 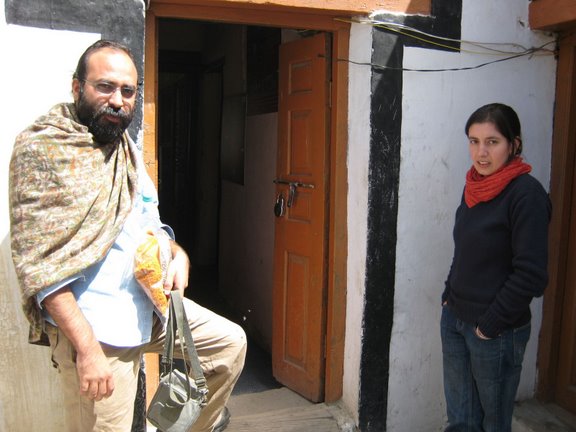 While in Kaza, I visited a very impressive NGO called Spiti Eco-Sphere, I had heard about them while in Delhi and had also spoken to them. It’s been run by a dynamic young lady called Ishita. I was surprised to know that she is been in Spiti from last 6 years and running this NGO. They are doing some very interesting work on Eco-Tourism, home stays, organic farming, energy conservation, water purification, actually the list is quite long, and they are covering the whole of Spiti Valley. Well, my meeting with Ishita was quite interesting and I ended up making another good friend.

So, after being stuck at Kaza for nearly 3 days, my next mission was to reach Tabo via Dhankar monastery. Next morning I was again in my SUV driving to Tabo. The route from Kaza to Tabo is like a road to paradise. Mettle road, huge mountains, vast river beds, Spiti river flowing, Tibetan style houses, goats n sheeps and ofcourse some green farm lands, not to forget the blue vast sky, wow I was in paradise now. After 20-25 kms on that road, there was a small turn on my left which took me to a good height at the famous 1000+ yrs. old Dhankar Monastery. The sight of monks in an ancient monastery in the middle of nowhere on a mountain top, was it real or a dream, difficult to comprehend. I met a few firangi friends there, who were staying at the monastery guest house from last 3-4 weeks. They surely knew much more about Spiti and Monasteries then me.

Another 20-25 kms and I reached my much awaited destination, I was at Tabo. It’s a small town, surrounded by desert mountains from all sides. It’s actually much smaller then I had anticipated. Once at Tabo, I first lodged myself in a neat guest house, there were also some open air cafes which served international cuisine. After I had my stomach full, I straightaway went to the famous ancient monastery where Dalai Lama performed Kal-chakra a few years ago. This was a series of small, one room temples, I guess around 9 of them. Each was an ancient architectural marvel, made of wood and mud. These monastic temples were made for deep meditation practices, there were some of the world’s best paintings and statues on the walls. These temples were so dark that you had to take a torch (wherever allowed) to look at the paintings. Each temple just had one small glazed glass opening on the roof, that was all the light one can have in those temples, of course now they do have electric lights also but they don’t switch them on. 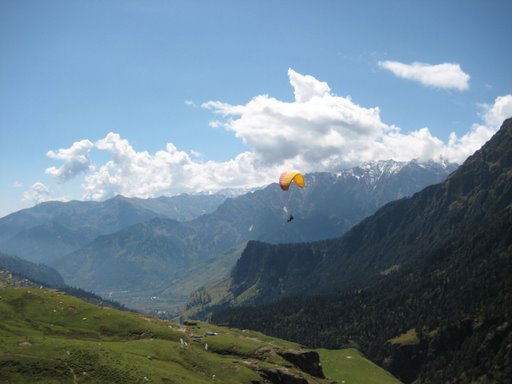 Sitting in those temples, one can easily go into deep states of meditation. The energy of that entire place especially within the temples was magical. I spent quite some time sitting inside there. The head monk was an old cute lama, though I didn’t get the chance to speak to him. On other side of the monastery, on a mountain, across the road were some ancient caves. It is said that Buddhist lamas used to meditate in those caves.

I really liked Tabo, which is considered as mini-Tibet, they now have a new monastery building, a new school for local kids, special dormitory for monks, a monastery guest house for tourists and a brand new hospital building as well. I was told that Dalai Lama wants to live in Tabo once he retires. Well, if that happens, Tabo will surely get on to the world map and hopefully then, we will have better roads, connectivity and support systems in this divine land of Buddhas.

As I was spending more time at Tabo I was contemplating what transpired me to come here, in the middle of nowhere, 2-3 days away from the nearest big town, dusty high altitude desert area, without any planning, without sufficient food or even woollen cloths. Well I think you do get the answer for such soul searching questions, but they can’t be explained.

After spending 2 days at Tabo, it was time to head back. I could have gone ahead and reached Delhi via Recong Peo – Rampur – Shimla route, but heard that Malling Nala was in a bad shape and could get closed any moment. So, took a U turn.

On my way back, I did not stop at Kaza, I think I had enough of it. By the time I was heading back, this whole trip had become a pilgrimage for me instead of a usual adventure travel. I spotted the beautiful and famous Kye Monastery and the kibber town from a distance, by now I was full of Tabo energy, so decided to appreciate this magnificent and beautiful monastery from a distance. 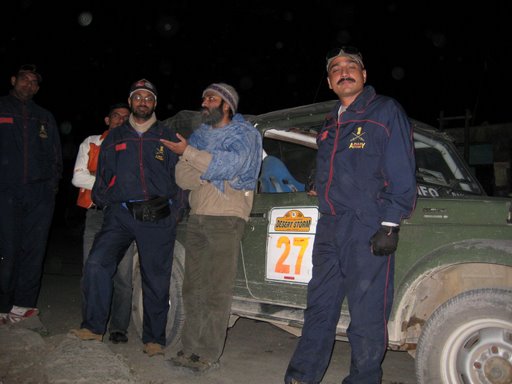 My next stop on my way back was Losar. Spend night at the guest house there, made friends with the family who owns and runs this beautiful little guest house, they have rooms with shared bath rooms (Rs. 200/-). In the evening I met Raid-De-Himalaya team from Army, they were on their rekey trip before the Raid.

Next morning I started early, passed thru Kunzum La and within a few hours I crossed Rohtang pass as well, but this time without any snow, the whole pass region was a dry land. The sight just made me thinking how a sprinkle of fresh snow had changed the entire beauty of the landscape just a few days ago and now it’s all a barren land. I was lucky enough to get both the contrasts. This reminded me of life, which in itself is a big contrast. My trip has helped me appreciate all the different colors of one same life. 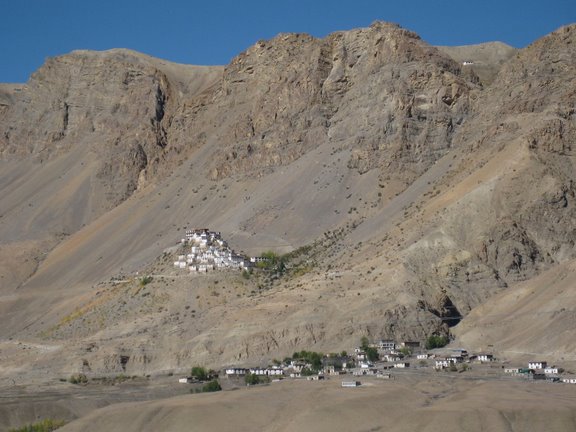 After 2 days of my return, I heard that an unusually massive snow storm had stuck Lahul & Spiti valley, around 500 tourists were stuck there for about 2 weeks including 2 dear friends of mine from USA. The govt. airlifted a few tourists, dropped food and water packets and later on cleared the roads.

I was lucky to have come back before the snow storm. This trip has helped me and taught me some very deep lessons. I am sure this has been one of the best, soul searching pilgrimages of my life.

â€¢carry enough woollens, torch lights, food packets, water and essential medicines, its quite easy to get stuck on the way without any support for a few hours or days

â€¢After Manali, the next fuel station is at Kaza, you can reach there in one tank full, depending on the performance of your vehicle and tank capacity

â€¢After Manali, only BSNL phone works at Kaza and then at Tabo (only BSNL Landline)

â€¢There are some very nice home stays on the route, get in touch with www.spitiecosphere.com for your travel/lodging arrangements.