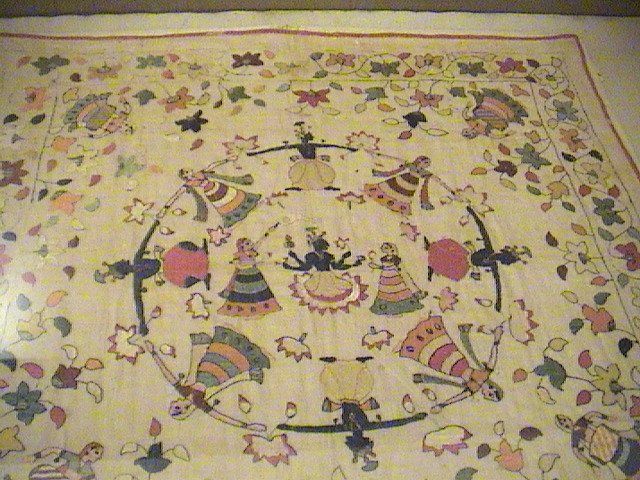 Chamba Rumals could be found in the collection of Indian and foreign museums like Victoria and Albert Museum who preserve a very fine and long Chamba wall hanging , depicting scenes from the Mahabharata , embroidered in the early nineteenth century. Chamba Rumal is a generic name for embroidery stitched by household women in different regions of Himachal Pradesh and Jammu. As wall hangings and museum pieces, Chamba Rumals depict the phase when the style of the miniature school of painting translated itself to the field of needle work .They are generally two to three square feet and depict themes from mythology, Pahari miniatures, ragas and raginis, Shrimad bhagwat, action of kings during hunting, raslila and so on embroidered on coarse cloth with glossy untwisted threads.[/lang_en][lang_de][/lang_de][lang_en]

The outline is executed in charcoal and then given to an artist who fills in all the details ranging from the inner composition to the floral or geometric border around the pictures. Both sides of the cloth are stitched simultaneously, so that the space on both sides is filled up making the design on both faces look equally effective and similar in content. This is why this technique is called Dorukha (Persian term meaning two faces), where there is no knot in the thread used.

In Chamba, during old days it was very important to give Chamba Rumal in dowry of a girl, a practice not visible in the marriages. After embroidery, the very important part is wooden frame fixed with glass and moving sides, another feature that is hard to find in lieu of shortage of carpenters who know how to prepare such frames.

As objects art they are still available today, but comparatively costly as the price ranges from Rs.250.00 to 10, 000, 00 depending upon the size, motif and the intricacy in making it. The Himachal Government releasing it as value took necessary steps to revive this style of embroidery and started a training centre in Chamba town. In the year 1974, a Master crafts man award was given to Maheshi Devi, better known as Adhyapika Jee by the then President of India and in 1993, Lalita Vakil also received the award on Chamba Rumal. Thereafter Chhimbi devi, Kamla Nayyer have also received the State awards and recommendations of Government of India.

Meanwhile, NGO’S have come forward to save this old tradition and dying art of Chamba but they are not given much importance by the Government Departments, although now a days more than 500 ladies and girls are working on Chamba Rumal embroidery after training.