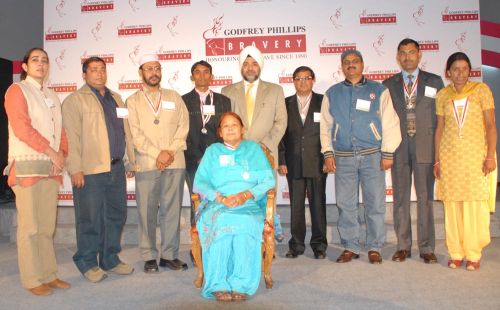 Shimla: Winners of 17th Godfrey Phillips Bravery Awards from Punjab, Haryana and Himachal were honoured and awarded by Governor Prabha Rau, at an impressive ceremony here on Wednesday.

Awards of three kinds, consisting of social acts of courage, physical bravery awards and for being an achiever despite physical disabilities an award named ‘mind of steel was conferred on 9 winners.

Ramesh Nayak, a shopkeeper from Haryana was given the gold in physical bravery award for having saved a man’s life after surviving through poisonous gas in a sewer. Virender Sharma, a custom officer in Himachal was picked for silver for having saved many passengers of a bus from being washed away after the vehicle got stuck in mid-stream and the waters began to suddenly rise.

Kirpal Thakur of Himachal was conferred bronze physical bravery award for having saved 5 people from being washed away in Swan river of Una.

8 of the 12 people from being drowned in Kandi canal in Hosiarpur district as the vehicle they were traveling in plunged into the waters.

For social acts of courage, the Gaddi women’s self help society from Himachal started by a French lady Isabelle Pompignat Mahendroo was given the gold award, Vinod Kumar Kanathia from Haryana for imparting education to muslim girls and women the silver award, Abdul Ghani was given the bronze award for being an inspiration in donating blood as he has done so 156 times and Aagaz from Punjab was picked for special award for it work in rural upliftment.

The mind of steel award was conferred on 52 year old Sangeeta Deol of Punjab for having overcome odds of polio disability and running a successful agri-business which employs over a dozen people.[/lang_en]