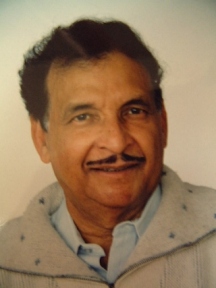 Hello friends today, I’d like to welcome Mr. Ravi Sadana for his latest release in Himachal called ‘The Three Verbs of Being’. He claims the most happenings in the book to be true and personally witnessed/experienced and ‘events cover 35 years but span 2 centuries.’

He says, “We have lost most valuable knowledge of the Vedic, Chinese antiquities, Egyptian, Inca , Aztec and Maya cultures. Recently they have found pyramids submerged at the southern tip of the southern-most Island of Japan when that area was land before the ice age meltdown covered it (8000 BCE). At once the bigwigs at the archaeological establishment condemned it as they don’t believe any civilization existed before the Mesopotamian/Egyptian era (about 3500 BCE). The irony is the same establishments is researching the pre-Clovis North American Indian civilization in the Andes and place it at 14000-18000 BCE.”

Without taking much of your precious time read yourself about his books and what he has to say about them.

Disha Singh: Please tell our readers about yourself, before we start with our other questions?

Ravi Sadana: I attended Sir Harcourt Butler Higher Secondary School at Shimla, University of Delhi and the Civil Aviation Training Institute at Allahabad before leaving for Canada. A retiree from The Dept. of Psychiatry, University of Toronto, Toronto, Canada, where my dept. provided biostatistical and analytical support for research projects, my current interests as a thinker, meditator and author enable me to do research in Metaphysical Sciences and Physical Sciences with applications in Psychology, Cosmology and Astrobiology.

Three children, two grandsons and living with my wife in California inspired me to author and publish two books, “The Three Verbs of Being” and “The Latitude Syndrome”, which I am bringing to readers in Himachal Pradesh and Delhi. 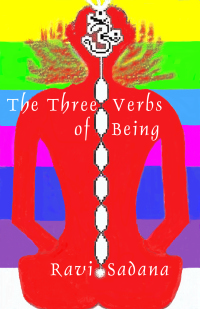 Disha: THREE VERBS OF BEING is your first book? Please tell our readers what prompted you to write the novel?

Ravi: Growing up in Shimla in Vedic culture with gurus and swamis during the British Raj and witnessing metaphysical phenomena at the Jakkhu temple convinced me that such rare events must be recorded for posterity.

Disha: How the title THREE VERBS OF BEING came?

Ravi: I was lucky to have teachers who taught not only maths and physics, but also steered young minds towards a deeper meaning and purpose of life, a subject native to the Himalayan culture and heritage. The title expresses the model through which life-experiences are sequenced in the process of personal growth. The Three Verbs of Being is the repository of my experiences.

Disha: Tells us the significance of Rashi and Dina in your book?

Ravi: The British were mesmerised by the mysticism of Himachal, and we Indians, were dumbfounded by the soft pale beauty of the British, but master-slave dynamics got in the way of a love affair. Life under the British rule demanded discipline and Dina, a civil servant working for the British became a puritanical tyrant. Rashi, a gifted youth steeped in the spirituality of the eternal feminine, could not identify with his roots as he was growing up. The ensuing father-son relationship is for the text books, defining what not to do in child-rearing, as the child is the father of man. Other relationships were spawned. Ram Dave and Shona are brilliant examples of the power of belief in mysticism. Rashi and Shona’s, a defining moment of beauty of the underlying unity of cultures. The significance is contrarian in that it contrasts with other relationships between the characters.

Disha: Who is the book aimed at, and what do you feel it can offer readers?

Ravi: These days, most cultures are becoming practical as they pursue economic gains to improve material life. But this is happening at the expense of losing contact with the spiritual reality of tradition and history, for which the Vedic Arya culture is unique in the world. I think we are losing a significant part of our roots in the economic transformation sweeping the land. I am not saying that economic development is not needed, rather that it accompany our spiritual traditions but not replace or cover them.

The readers will get this message from the books as they offer alternative lifestyles where working compromises between the old and the new are clear winners.

They are a “must read” for everyone old enough to grasp the concepts.

Disha: What does spirituality, karma and reincarnation mean to you?

Ravi: The term Arya describes a person with an unimpeachable character, that’s who we are. Spirituality compels an Arya to live by following her conscience and dharma, fulfilling duties and obligations, creating goodwill and happiness for all members of mankind.

Karma compels us to be answerable to consequences of our actions as each act on our part touches other members of the society. Everything needs space to exist in and space exists in everything from the subatomic particle to the farthest galaxy of the universe. This fact of nature connects everything with everything else through intelligence which doesn’t need space to exist, meaning that intelligence is everywhere. This is a scientific fact. (For the Science paper, goto: http://OurNewScience.com/)

Reincarnation describes a system of evolutionary cycles with the goal of attaining higher intelligence until we no longer need it. Karma plays a role in it.

Disha: Do you think people are becoming more aware and more tolerant of spiritual matters?

Ravi: An incisive question, indeed. This is a complex topic playing in the unceasing march of the civilizations on the road called evolution and is being debated from diverse philosophical viewpoints.

Summary observations may provide a sense of direction or its lack in modern era.

Life as a whole is becoming demanding in a progressive industrialized society. Liberal and lose ideas percolate through the established belief systems. If priorities and time are not managed with a clear objective in mind, people get into routines and mindsets where spiritual health is ignored. Science has made an immense contribution to providing creature comforts for the busy society. However, Science does not promote spiritual awareness. In a way, as a society we are moving away from “spiritual matters” (which is the basis of one’s existence). Religion doesn’t fill this gap. If anything, religion politicises spirituality and makes it irrelevant, thus increasing the gap.

We have lost precious working knowledge from ancient wisdoms like the Vedic school, the Chinese antiquities, The Egyptians, the Incas and the Aztecs, to mention a few. If you read the modern scientific theories of how the pyramids were built or how the Incas aligned many cities like Machu Pichu on cosmic meridians in the Andes, they sound like a child trying to explain how an aircraft flies! If we are not watchful, Science will replace the ubiquitous pseudo religion that developed countries have in their midst. I think Scientific progress (materialism) and spirituality are mutually exclusive. (Pardon me for this digression. But I think it is pertinent to the question at hand.) 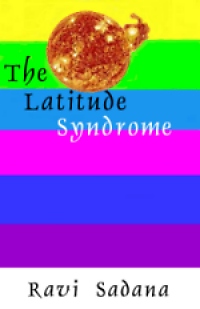 Spirituality is intensely personal as it is intricately involved with one’s being. So people have to be reminded of “spiritual matters” and the soundness of the old wisdoms, despite what Science has to say about them. Is the education system up to the challenge? There is an obvious chasm which is only going to widen with material progress. My goal is that the “spiritual torch” will remain lit by my humble efforts of two books and my ongoing research and scientific papers, when added to similar work by others. India has a brilliant tradition in matters spiritual, going back thousands of years. We gave Yoga to the world, what a unique gift!

Disha: Please some light on your book THE LATITUDE SYNDROME.

Ravi: A companion self-help and self-therapy book of easy-to-follow instructions and lessons, offer an array of lifestyles to consider and evaluate. Includes a collection of new ideas and techniques, essays and descriptions of concepts like time, evolution, karma, darshan, relationships and seed-ideas. Human brain and memory systems are explored from Vedic principles in the light of current scientific findings.

A brand new technique of “Meditative-listening” of music is offered for personal purification and growth through self-administered catharsis.

The role of the phenomenon of “The Cantilever Effect” is explained for day-to-day living for super-cognitive effects.

True to its name, the book explores the visible and invisible aspects of solar effects (Surya shakti) with particular emphases on spiritual health and nutrition, including recipes and preparation methods. Topics like layered health model, gonadic health and ambience, biological differences and the role of skin are discussed in detail.

Disha: Why did you choose the setting of the book from the days of the Imperial British Raj?

Ravi: The books are based on the lives of real families, interactions between them and factual events that took place in the prewar days when Shimla was at the height of Imperial glory as summer capital of British India. Many events involved Indian subjects and members of British authorities. Interaction between the two sides was a mystical drama as relations between the two ebbed and flowed, sometimes precariously close to disaster.

Disha: You say, “Seen through the eyes of pubescence, the true tale paints events of a period covering thirty-five years but actually spanning two centuries! .” Is that true? If so which all are they in the book?

Ravi: Yes, the two timelines are very real and are the result of the rare phenomenon of “Antique Memory” (AM) related to reincarnation. In most cases memories gained in one lifespan end at death. In some cases, “AM” is made manifest by clairaudience or akashvani when real sounds (spoken and struck) are heard or scenes and sights are vividly perceived when there is no physical basis for them. The period a soul inhabits one body form biological roots. The collective period the same soul has migrated through many bodies (each episode involving a new set of biological parents) to arrive at the present body, comprises extra-biological roots.

Rashi experiences episodes of akashvani throughout his formative years. The period of two hundred is made manifest in Salzburg, when the agonizing mystery is accidentally revealed by Shona. These things are very real to one experiencing them in real life.

Disha: How can our readers purchase a copy for themselves?

Ravi: Arrangements are being made to have the books in stores in India in the near future and only Minerva Book House, The Mall Road, Shimla, is displaying a set and more book sets are in pipeline to be exported. Moreover, they can be purchased on the internet at: http://OurNewScience.com/ 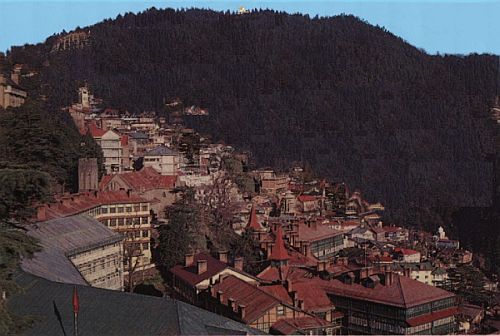 Disha: Is there anything else you’d like to pass on to the people?

The economic world is moving forward at a breakneck speed, sweeping people off their feet in a mood of social euphoria. The future looks promising as poverty is eradicated and the basic human needs of food, shelter, good health and education are successfully met by the less privileged. Science is fast encroaching upon every aspect of daily life with high technology providing a dazzling array of goods for work and personal enjoyment.

Remember that scientific methods and technocrats do not promote spiritual concepts. If anything, some devices create a false image of satisfaction through adrenal physiology which doesn’t have any effect on spiritual health.

It is up to the enlightened individual to strike a balance between the two, a privilege fit for a self-determining people. The ultimate yardstick is the personal sense of happiness and fulfilment.

Good luck to you all!