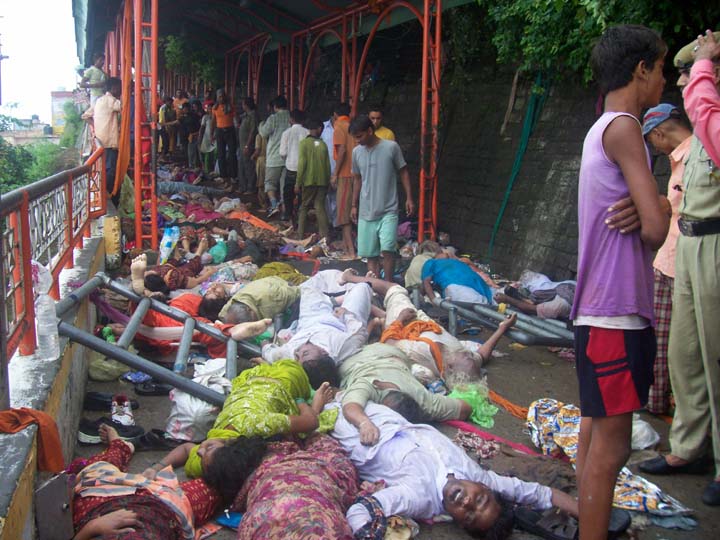 Shimla: Magnitude of the stampede tragedy on Sunday has not deterred devotees from making their way again to the hilltop shrine of Naina Devi. In a guarded way pilgrims seeking the blessings of the Devi continue to move up the same path that claimed 146 lives a day earlier.

Twenty five years ago, two the day, a tragedy of a similar nature had resulted in the death of 53 persons. It was the second day of the Sharvan Astami Mela, just like the one on Sunday, in 1983 when a stampede resulting into a railing breaking down that had caused the deaths.

“It was a fire that started in some shop along the way that caused the tragedy then,” recalls Virbhadra Singh, who had just become chief minister of the state for the first time a few months earlier.

Virbhadra Singh told My Himachal News, “We did bring most of the important temples under a trust and at Naina Devi, the entry and departure paths along the hillside were separated.”

A quarter century later that additional infrastructure proved inadequate. “It was a failure to regulate the movement of people, especially when one was aware that there is local festival at Naina Devi at this time of the year, says Pankaj Goswami, who has just come back from a pilgrimage to Shrikhand, a high altitude shrine in Kinnaur.

Holding inadequate security responsible for the tragedy, former chief minister said, “Only 250 security personnel to regulate a crowd of thousands during auspicious days was clearly insufficient”

To fix accountability, Virbhadra Singh demanded a judicial inquiry be got conducted into the pilgrim tragedy.Managed by a trust, the Naina Devi temple shrine trust is reported to be making offering collections in crores, each year.

“Why are such funds not used to improve amenities like access, parking spaces, drinking water and wash rooms along the way,” says Goswami.

Insisting on anonymity a Bilaspur district police official said, “Laying the blame on the police is easy.”

“Not just inadequate police for regulation of peoples movement at the shrine, it’s a failure of the system. Approach paths are narrow, there are encroachments along the way, civic amenities are insufficient for the ever increasing number of pilgrims, disaster management squads are not there and mobile emergency health care services are lacking,” he said.

Ashwani Soni, a pilgrim from Jalandhar, is sore about the tax collected from vehicles which enter the state. “With my family I often head out visiting temples and duly pay the tax Himachal collects on entry.”

“Unlike Vaishno Devi where the management has improved the entire approach path, temples in Himachal that I visit have the same old problems that existed a decade earlier,” says Soni. Incidentally, pilgrims constitute the largest group categorized as tourists who visit the state annually.