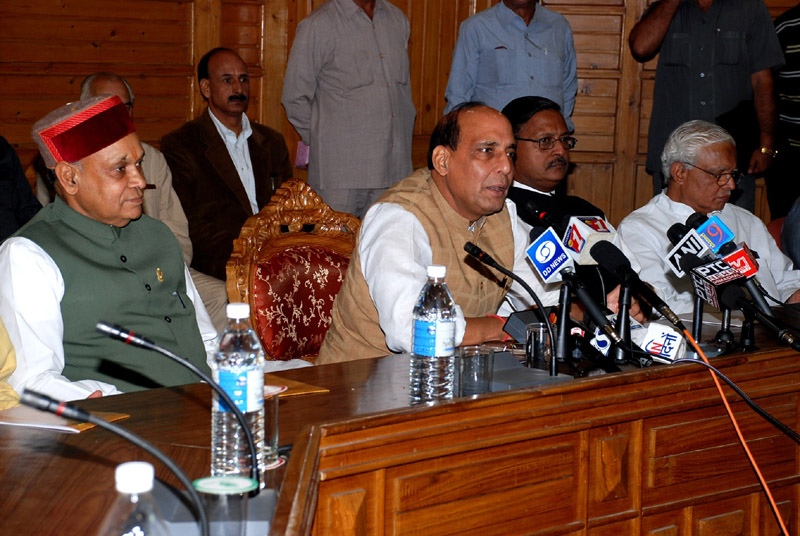 Unless India does not get a clean waiver with the Nuclear Supply Group, the government should not take forward the nuclear deal, said BJP president Rajnath Singh here.

Speaking on a wide range of issues on his maiden interaction with the media after a BJP government returned to power in Himachal, about 8 months ago, Singh said, “The apprehensions expressed by the opposition to the nuclear deal were coming true in negotiations being carried out.”

The government should not succumb to the new conditions about agreeing to not carrying out any more nuclear tests, or about opening up strategic nuclear plants to International Atomic Energy Association (IAEA) inspections or those about reprocessing of fuel, said Singh.

Holding the Manmohan Singh led UPA government responsible for price rise, not adopting a tough stance against Pakistan over frequent ceasefire violations and creating a crisis over Amarnath shrine board land issue.

He said that low inflation and high growth was contradiction which the UPA government had tried to bolster. “With inflation being double that projected growth figures, the common man has been badly hit and the government has failed to contain rising prices,” said Singh.

Making a comparison with the previous Vajpayee led NDA government he said that the growth of 6 percent during that period was twice that of what inflation was then.

Despite having fought off the Kargil incursion and faced economic sanctions after the Pokarran nuclear blasts, the government had successfully contained prices, something which the present government had failed to do so, he said.

With the government continuing to play ball with Pakistan, the BJP president said that in the face of 31 ceasefire violations and 41 attempts to infiltrate the line of control (LOC), the government should stop its confidence building measures with the country.

About the Amarnath Shirne board issue he said that BJP was with the Jammu Sagarsh Smithi and wanted the government to restore the land to the board as mandated by a court decision. After giving the land to the shrine board, withdrawing it was a wrong decision of the government which has sparked off the current crisis, said Rajnath Singh.

He asked the government to bring forth sedition charges against those people who openly brought out Pakistan flags and spoke about cession from the country.[/lang_en]