With 91 per cent population living in the rural areas of the State and about 70 per cent of the total work force depending upon agriculture, farm economy of the State assumes a great significance in the context of raising the overall rate of growth of the economy on the one hand, and raising the incomes of the vast multitude of farmers, on the other. The farm sector also faces serious constraints on productivity front in the State in the sense that nearly four-fifth of the farm holdings belong to the small and marginal category, the irrigated area constitutes about one-fifth of the total area under plough and the technology innovations are not possible in relation to the economies of scale due to topography and climatic conditions. 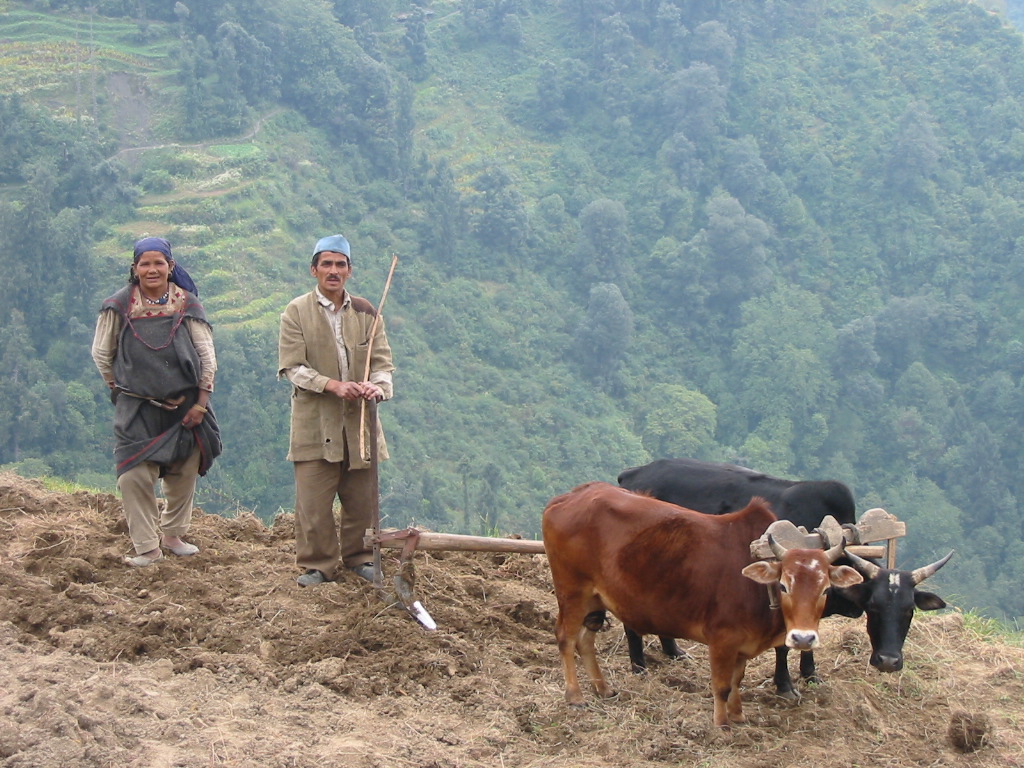 Much has been said about the horticultural revolution in the State and lately, one has heard about the emergence of vegetable cultivation as a high return activity. These need to be gone into to understand whether any such achievements really exist and if yes, what is their magnitude and sustainability in the State.

This paper attempts at taking an overview on the farm sector in the State vis-Ã -vis the all-India scenario. In proceeding in that direction, it is necessary that some basic statistics are presented and then productivity comparisons are made with a view to identifying the niche areas or areas of distinct comparative advantage. Table 1 below presents the distribution of farm holdings and the area commanded for the State of Himachal Pradesh and all-India.

Table 1: Distribution of holdings, area and the average size of holdings according to 1995-96 Agricultural Census

Apart from the distributional aspect of the farm holdings, the other body of data needing a look at on the supply side of productivity is the land use of the available area. The data in this behalf is presented in table 2 below:

Table 2: Aspects of land use data constituting the supply side of farm productivity (â€˜000 hectares)

The above data will now be analysed to understand the overall structure of the farm economy for the State of Himachal Pradesh as compared to the all-India picture on the one hand, and also for analyzing the changes that have taken place in the two over time, i.e. from 1992-93 to 1999-2000.

Another attribute of productivity is the fertilizer use. The data in Table 2 above indicates that per hectare fertilizer use in Himachal Pradesh is at one-third the level of the all-India average. This appears to be a factor responsible for comparatively lower productivity in Himachal Pradesh. However, it would be a bit out of place to accept it as such despite the fact that firm data on the overall availability of manure from the animal wealth in the State is not available. It is, however, important to mention that the livestock population of the State is about 55 lakh and could be contributing significantly to the availability of manure for the farm operations.

Another attribute which can be considered as an important indicator of farm diversification and better productivity in the context of Himachal Pradesh is the shift from foodgrains to non-foodgrain crops. The data presented above in Table 2 indicates that there has not been any significant change in the area under non-foodgrain crops over the period under study from 1992-93 to 1999-2000. However, there has been a perceptible increase in the area commanded by the non-foodgrain crops at the all-India level from 33.6 per cent of the gross cropped area to 35.1 per cent during the same period. An important inference that can be drawn here is that the much hyped farm diversification story of Himachal Pradesh is not all that true. This inference again needs to be taken with greater care because the data available for area under fruits and vegetables in Himachal Pradesh appears to be not getting correctly reflected in the annual season and crop reports, the only authentic source of such data.

With this preliminary analysis on the supply side of the productivity, it would be interesting to go into the productivity data for various crops for which the comparative data for all-India and Himachal Pradesh is available.

Since wheat, maize and rice account for a majority of the area under foodgrains, it will be appropriate to compare the productivity scenario for these crops over time. The productivity data for these crops over time for Himachal Pradesh and all-India has been analysed and presented in the following text. The data for rice crop is contained in the following table:-

Table 3 : Productivity data of rice : HP and all-India over time

The data presented in the above table indicates an interesting picture. For Himachal Pradesh, the area under rice has declined by 16.7 per cent over the period under study whereas the production has increased by about 16.9 per cent. The result is that productivity per hectare has increased over the study period by about 40 per cent. Coming to the all-India picture, we see that the area has shown an increase of about 16.6 per cent, the production has increased by about 111.3 per cent and the productivity per hectare has gone up by 81.6 per cent. These two parameters present a distinct picture for Himachal Pradesh vis-a-vis the all-India scenario. There has been a decline in the area under rice in Himachal Pradesh despite a 40 per cent increase in the productivity. What could be the reasons for such an area loss need to be studied separately? However, it would not be far-fetched to make a conjecture that the green revolution may have made a small impact in the State as far as rice crop is concerned. The bottom-line is that the productivity increase in Himachal Pradesh has been below 50 per cent of the national average and cultivation of rice does not appear to be presenting a situation of distinct advantage in the farm scenario for Himachal Pradesh. This is indicative of the trend in the decline in the area under rice cultivation in the State.

We now turn to another Kharif crop, i.e. Maize. As is generally understood, maize has a higher level of productivity in Himachal Pradesh as compared to the all-India average. Let us see how the actual data exhibits this popularly understood situation. The data in this behalf is presented in table 4 below:-

Table 4: Productivity data for maize: HP and all-India comparison of area, production and productivity over time

Table 5: Productivity data for wheat: HP and all-India comparison of area, production and productivity over time

The data in the above table clearly reveals that the expansion in area, increase in production and the productivity per hectare for wheat in Himachal Pradesh has lagged far behind the all-India picture. One major reason for this is the low proportion of irrigated area in the State, as has been indicted in an earlier section of this paper.

With this analysis of the cereal crops, it can be safely inferred that except for maize, the other crops do not hold out any promise in Himachal Pradesh towards raising the incomes of the farmers and impacting the growth rate of economy.

A lot has been said about the horticultural revolution in Himachal Pradesh. It would be of interest to analyse the comparative performance in the State and the country at the macro level. The data for all fruits and nuts is presented in the following table:-

Table 6: Productivity data for fruits and nuts: HP and all-India comparison of area, production and productivity over time

Table 7: Productivity data for apples: H.P. and all-India comparison of area, production and productivity over time

The data presented in the above table will be viewed from two angles. Firstly, whether productivity of apples in Himachal Pradesh has a distinct edge over the all-India picture and secondly, how does the State contribute to the apple output for the country.

The area expansion has occurred at a higher level for Himachal Pradesh and so has the production increased. The productivity shows a disturbing declining trend in both the cases. However, it is important to see that per hectare production of apples in Himachal Pradesh has consistently been lower than the all-India average. Therefore, the State does not have a distinct advantage even in the case of apple cultivation.

These pointers indicate to a serious problem and it may be necessary to do a detailed analysis of how the apple industry has helped the economy of the State, the revenues of the State Government and the economy of the individual farmers. The protection provided by the successive State Governments to cultivation of apples also needs to be analysed. These are necessary in view of the WTO regime becoming fully operational in the very near future.

Having said this about apple cultivation in Himachal Pradesh, one may look at the situation of other fruits and nuts as well. The requisite data is contained in table 8 below:

Table 8: Productivity data for fruits and nuts other than apple: HP and all-India comparison of area, production and productivity over time

It transpires from the above analysis that the horticulture sector in Himachal Pradesh does not constitute a position of distinct advantage even in the country context, what to mention of global competitiveness. A similar analysis for the vegetable production could not be included in this paper for want of appropriate data and would be attempted subsequently.

In terms of the policy prescriptions, the recent emphasis on bringing more area under the maize crop by planting high performance hybrids, promoting vegetable cultivation and accelerating the root stock and clonal changes alongside the replant programme under horticulture appear to be the steps in the right direction. It is extremely important to underline that farming at a larger level appears to be a subsidiary occupation despite that fact that it accommodates nearly 70 per cent of the work force according to the census data. Another critical area is reducing the massive gap between the irrigation potential created and actual utilization. The true depiction of the area data for the farm sector is another area of concern because the Annual Season and Crop Reports do not capture the area under fruits and vegetables correctly. The data on irrigation also suffers from the infirmity of the Annual Season and Crop Reports not getting updated as the newer areas are brought under assured irrigation. The farm productivity improvements in Himachal Pradesh will have to follow a district by district project based approach so that for each district, a lead crop or group of crops is brought into focus to utilize the distinct advantages available. Post harvest handling and marketing continue to pose a serious threat to the vulnerable farmers and State intervention may not be the correct way to address it. The policy formulators in the State also need to factor in the changes and challenges that are emerging from the WTO prescriptions despite the fact that the Government of India is attempting to ensure as safe and protective regime for the Indian farmers as the trans-country agreements would admit.