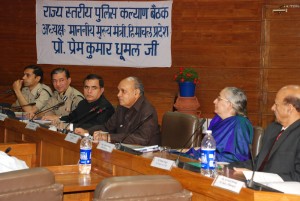 Himachal Pradesh police would soon don a new look with a new attractive uniform from August 15 this year while police stations at Dhalli, Mandi and Una have qualified for ISO Certificates.

Prem Kumar Dhumal, the Chief Minister addressing the State Level Police Welfare Meeting said that the state government has completed the recruitment process of 1,523 constables and training would start from this month onwards at five different training centers and assured that the department would be fully computerized within a month.
He further emphasized the need to launch a special drive to nab the anti social elements and check traffic offences to provide people with an efficient administration, security to life and property while concerted efforts need to be made by launching special drive to check the drug mafia.

Meanwhile, the police budget had been enhanced by 23 percent for the current financial year in order to strengthen the infrastructure to facilitate the functioning of the police personnel. The cases of the contractual staff of the 2nd IRB would also be reviewed for regularization and appropriate action would be taken to deliver them justice. Dispensations to the police NGOs, additional benefits like mobile allowance to SHOs, refreshments to the police personnel, food subsidy, promotional avenues and other such avenues would be considered as well.