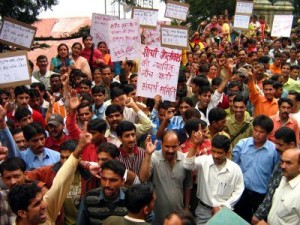 Shimla With a forensic report having ruled out use of guns in the firing on industrial workers on Monday, the investigation team has now focused on the owner of the factory and has asked him to join the investigation as his name figures in the FIR.

An investigating officer revealed that RC Mahlotra, owner of Tigaksha Metallics (Supermax), T the unit whose security guards had gunned down one worker and injured four others has been summoned from Mumbai. â€œOtherwise we would move for securing arrest warrants to make him join the investigation, he said.

Meanwhile a forensic report has found that the material recovered from the injured workers was bullet parts and not gun pellets. The forensic report has put to rest suspicion about use of other weapons besides the 5 revolvers and pistols that the police hade seized from the seven sharp shooters and the manager of the factory in Shoghi.

Following a dispute between the workers and the management, the workers were fired upon by personal security guards of the unit what the police called â€˜unprovokedâ€™ in which one worker was killed. Acting swiftly, the police by the evening after saving 8 persons from mob violence had arrested them from the factory for having resorted to firing upon the workers.

Workers of the Shoghi factory along with Bhartiya Mazdoor Sangh today held a protest in the state capital seeking stringent action against those responsible for the death of a worker.