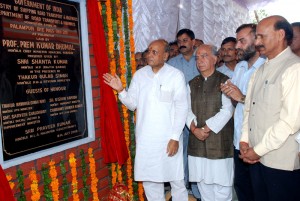 The by pass would easy the traffic congestion in the town as Palampur coming up as a major town in the region, the number of vehicles has been increasing gradually. The Chief Minister directed the authorities to complete the same by 2010. Meanwhile a modern fire station completed at a cost of 1.10 crores was also dedicated to the residents.