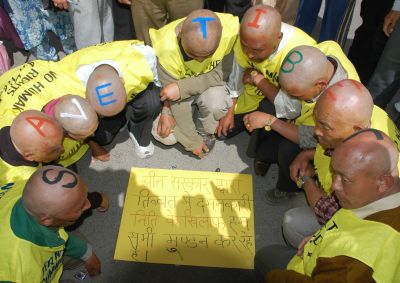 SHIMLA: The Tibetan community in Himachal, whose number has swollen up manifold in past few years in the hill town, is now demanding a big chunk of land on rent from the local municipal committee to spread its social and political activities here. Although the local committee has rejected its demand to lease out about 1.5 hectares of land at about Rs 3 lakh rent per annum yet some of the Tibetan Youth Congress members are still hopeful and are planning to approach the State Government on this issue.

The Tibetan community who were working as labourers and construction workers after their migration from Tibet has become surprisingly a very “well off” group of aggressive traders in the hill State in a short time.

Now they sell ready made garments and foreign goods, specialise in serving Chinese and Tibetan food and sell spices and condiments. They also teach Buddhism to the Westerns and Indian elite at their religious centres here.

Tibetans have done large scale encroachments in various suburbs of the capital town and have established monasteries, schools and dispensaries in large numbers. There is a whole scale encroached Tibetan market in the main town and the residents and tourists face a near stampede situation here every day. The local authorities have failed to vacate these encroachments because of indirect government backing to these people, said sources.

Aping the West with the liberal foreign aid and assistance, their assorted living standards have largely improved and put any middle class family to shame in the hill town, said the majority old timers in Shimla who had seen them in 60s and early 70s.

Their youth can be spotted in any posh restaurants, bars and billiard clubs. They are owning shops and eating joints in the main town. Number of them can be seen driving high end SUVs in Manali, Shimla and Dharamsala. The government has provided them an exclusive Central School affiliated to the CBSE in Chotta Shimla.

For their recent high profile protest against China the Tibetans in Shimla had hired the most expensive location on the fashionable Mall while flaunting their shaven heads to the local and foreign media. This location which was never hired by any political party here was otherwise hired by the corporate groups to advertise their products. “We are doing it for our country”, said the hard-line freedom fighters, when asked about the exorbitant fees they are paying the municipal corporation every day.

Besides Shimla they have a sizeable presence in Kangra, Mandi and Kullu districts of the State. Having large monasteries in Riwalsar, Manali, Kusumpati and Sanjauli, they own and inhabit the majority areas and markets in Macleodgunj town in upper Dharamsala.