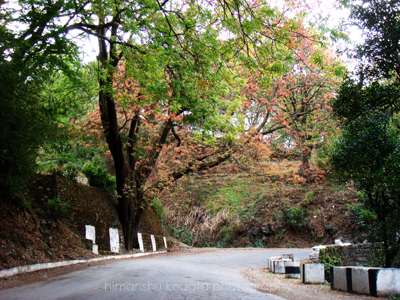 I planned to visit Kasauli, 77 kms from Shimla. Being accompanied with two friends of mine-Himanshu and Sahil elevated my spirit more to take this journey, to discover, to be one in the lap’s of nature, to seek pleasure in the ambience of the sequester spot.

We set off on the Friday morning at 9 am from Shimla’s bus stand. We took a bus which routed via Dharampur. Our spirits were a little dampened as it started raining early but that didn’t stop us. The semi deluxe bus single fair was Rs. 240. Reaching Dharampur, we satisfied our appetite with the delicious and homely preparations at â€˜Gaini da Dhaba’, a famous highway dhaba.

Thereafter we decided to walk to Kasauli, which is some 8 km from there. That proved a boon in disguise as we came across the famous historical Lawrence School at Sanawar, one of the oldest institutions, a glory that continues with its traditions, disciplining students and educating them. It was sight seeing in itself and gave us a chance to rest a little, admiring the archaic beauty of the place. Then we moved on to the famous temple of Sidhi Baba Balak Nathji. It is said that one night, Baba Balak Nath appeared in dreams of a local resident-named Vijay Kumar and asked him to construct a temple at this place, which is why it stands here today. The temple is sought after by issueless couples as it is believed that the divine blesses them with children then. A number of photographs of such blessed children are the evidence, kept as record by Baba Vijay Kumar ji in the temple.

Our next stop was the Shirdi Sai baba temple, which lies adjacent to the Baba Balak Nath temple, built in 1989 by Sai Sabha Trust. The temple has an idol of Sai Baba built at Jaipur and supports a burning flame, significant of the divine power of Sai Babaji of Shirdi. Stopping over three times, we were still left to cover 5 more kilometers to reach Kasauli. The rest of the walk passed blissfully through red mud caused by rain and green enchanting sights. Kasauli-the town is 1951 meters above the sea level. All through there were some astonishing sights, colorful trees, green in bounty and that was just enough to make our day. 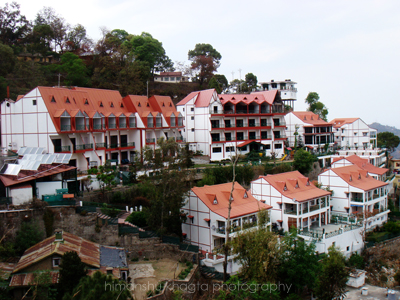 To make sure that the journey didn’t take the wrong way, we had booked rooms at Kasauli resort, the price being Rs.13000 for 3 days. The staff at the resort was helpful people and welcomed us with smiles speaking of warmth. After a quick wash, we were again set and all ready to explore the lawns & the road adjoining the Hotel. We ended reaching up the Kasauli graveyard. The â€˜beware of dogs’ placard scared us more than the thought of dead people around us. It was the perfect environment, ghostly yet peaceful but the trance was soon interrupted with the strident sound of barking dogs. It may sound meek but all three of us were afraid, however, we somehow managed to reach Kasaul 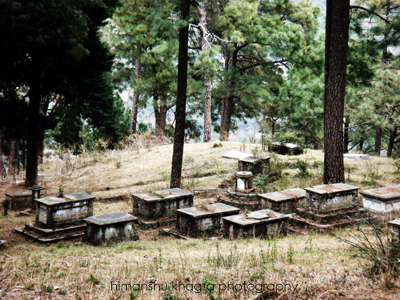 i Market, where we had a quick snack before walking down a mile to reach Monkey Point. The place is named after Lord Hanuman who rested one of his feet at this point when he was looking for the sanjeevani booti as told to us in the epic

-Ramayana. A human foot shaped mountain can still be seen from this point. A temple here was erected in early 1970’s when a shila was discovered here after numerous accidents that took place during construction of Air Force Station in the area. Notably, no accidents took place after the placement of the shila in the temple atop this mountain. The climb to this place is arduous and sadly, no photography is permitted in its vicinity.

Resting there after the walk, we felt heavenly wi 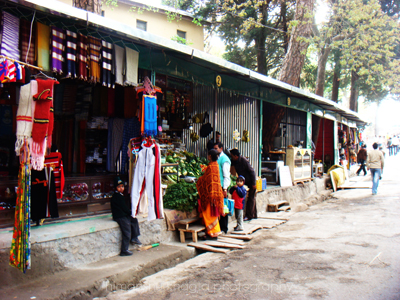 th sceneries of nature all around us, alluring and peaceful. It was a day-full of excitement but worth it. Indeed, Kasauli is one place to visit if you want to get a high from nature at its best.