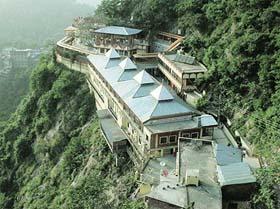 Hamirpur: Amid chanting of religious hymns and slogans of Jai babe ji by the thousands of devotees, the month long Chaitra melas (fair) started at historic shrine of Baba Balak Nath at Deotsidh in Hamirpur district today.

Hamirpur Deputy Commissioner, Ms. Nandita Gupta declared open the melas in presence of thousands of men, women and children present there on this occasion. Deotsidh is located on the Dhar sidh hillock and is known world wide. Baba devotees from all parts of the world visit the temple every year during the Chaitra month to pay their obeisance to the Babaji for their own wellbeing.

However, Ms. Gupta didn’t enter the cave as per old traditions which don’t allow the ladies to visit the cave. She paid her obeisance to the Babaji from a platform erected at a distance from the cave and sought blessings for the people of the state and the district. She was accompanied by other senior district officers who visited the cave on her behalf and unfurled the Red temple flag atop the temple.

There was heavy rush of devotees visiting the temple since last night and they thronged the shrine to pay their obeisance to the Babaji. They offered puja in the cave of Baba Balak Nath, the incarnation of Lord Kartekya, the son of Lord Shiva and paid their obeisance to the Babaji. They offered wheat loaves and prashad to Baba ji and sought his blessings for them and their families.

While talking to reporters at the temple office, Deputy Commissioner said that necessary arrangements had been made for the month long mela. Adequate police forces had been deployed to manage the huge crowd and to maintain the law and order around the temple complex.

Replying to a question by a reporter, she stressed the need to allow the ladies to visit the cave adding that it was possible only when people wanted it. However, she said that she was following the ancient traditions and would not break those just for herself.

Meanwhile, Deotsidh kaswa is humming with the religious fervor after the arrival of devotees there. Shops and houses are beautifully decorated and given a new look for the benefit of the devotees.