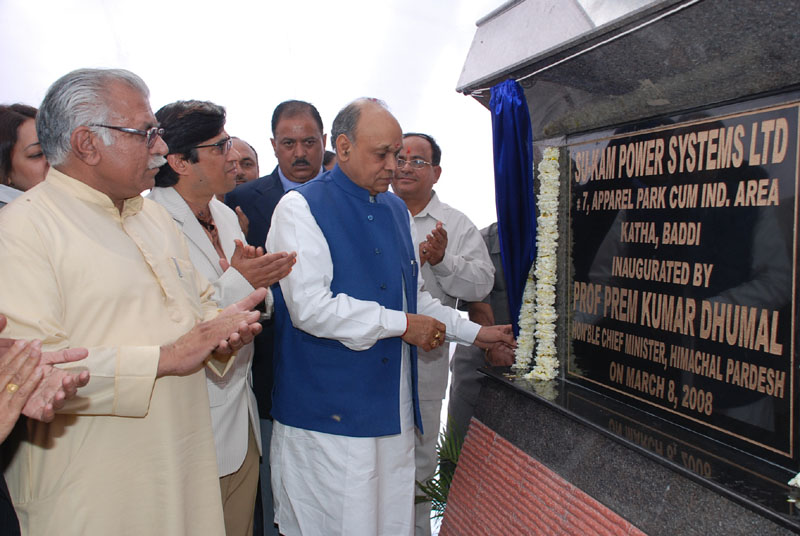 KUMARHATTI: While focusing on the need to provide friendly industrial atmosphere, Prof. Prem Kumar Dhumal the CM today assured the industrialists to take their difficulties on priority besides strengthening the industrial infrastructure. The CM was speaking during the inaugural ceremony of Su-kam, SMF Battery plant at Baddi today.

He said that state government was committed to realize the dream of former Prime Minister, Mr. Atal Behari Vajpayee, who has special attachment with state people.

The CM said that there was an urgent need for dispersal of industrial activities to the interiors of the state so that entire area was involved in industrial expansion activities. He said, Su-kam was one of the export oriented unit that has come up in Baddi area. There were number of such units that were being set up and could be instrumental in providing momentum to industrialization, he remarked.

â€œThe state would welcome more eco-friendly and export oriented units that would generate employment and self-employment to educated unemployed youth. However at the same time the interests of the state and its people would also be protected.â€

The CM Said the government would look into the illegal land deals, if any, had taken place in the industrial area and added that government would make all land deals transparent and protect the interests of entrepreneurs and land owners of the area, who had made their land available to give boost to industrialization. He said that no middleman would be permitted to intervene in land purchase matters.

The CM said that minimum wages to industrial workers would be ensured by implementing Minimum Wages Act in letter and spirit. He said that entrepreneurs also needed to maintain work culture, cordial relations with workers so that best outputs were received. He appealed to the industrialists to invest in the best law and order, investment friendly environment of the state where government would act as facilitator and extend all help. He said that basic infrastructure in all industrial areas would be strengthened.

He asserted that his government was doing every effort to get the special industrial package extended up to 2013. This was our right and we would take it, he maintained. The state would raise its concern to get special industrial package to its original sanctioned date of 2013 by Mr. Vajpayee through all the channels. The objective of the package would not be obtained unless it was extended, he maintained.

Speaking during occasion, Dr. Rajiv Bindal, Health Minister said that rapid industrialization was taking place in the district. He congratulated the CM for presenting a popular budget.