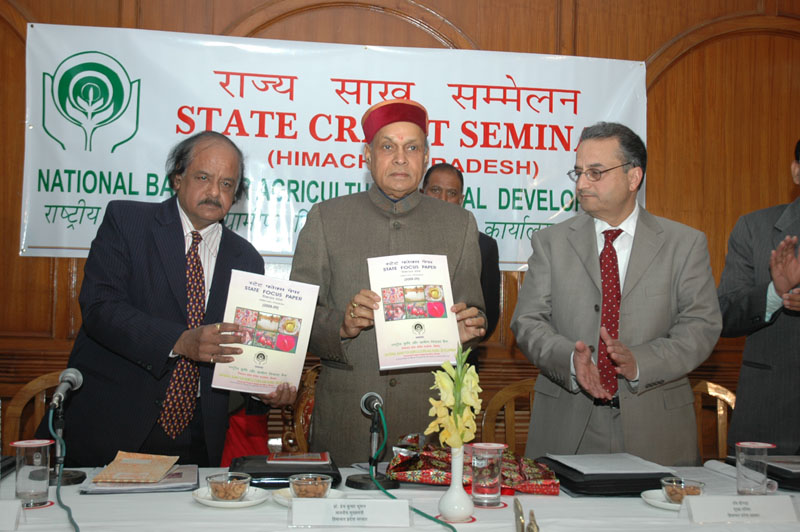 Addressing the inaugural of State Credit Seminar-2008-09 which was organized by NABARD, Chief Minister Prem Kumar Dhumal emphasized the need for NABARD funding which would serve as a powerful instrument in doubling the irrigation network in next five years. He also said that the State Government has adopted the agriculture sector as thrust for the coming financial year and aims to strengthen it.Underlining the need for change in approach, he stressed upon traditional agricultural practices. He said that agriculture has been kept as a top priority so as to generate more employment venues. He also made a point that the State Government had asked the state scientists to come up with specific irrigation plans for each district for water efficient minor, mini and micro irrigation schemes.

With respect to the fact that instead of a large geographical area but meager land holdings, he said that the scheme is to encourage farmers adopt multi cropping system and plow supplementary cash crops to gain optimum benefits. He mentioned that the government has asked various departments like Agriculture, Horticulture, Forest and Ayurveda to work in coordination to discover and implement the best possibilities. The government also plans to conduct surveys in the region to protect the environment.

Prof. Dhumal said that NABARDâ€™s initiative of funding the â€˜home stayâ€™ scheme would benefit the rural masses and contribute towards the rural tourism promotion radically. Appreciating the role of NABARD in funding the â€˜Saraswati Bal Vidya Sankalp Yojnaâ€™, he released the â€˜State Focus Paperâ€™ at the occasion which has also been prepared by NABARD for the coming financial year of the state.