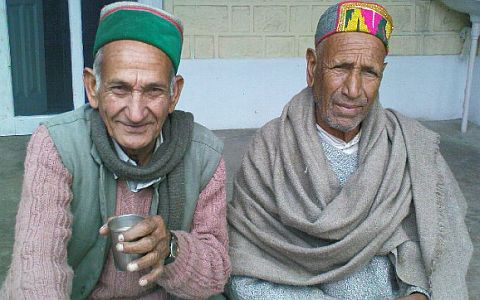 JawalaMukhi: A recipient of the monthly oldage pension being given by the Himachal State Government, Fakir Chand, 82, a resident of Raja Ka Talab, says a hike of 50 per cent will now enable him in making up his diurnal needs. Like him another handicapped pensioner from Nagri, Bhura Ram, 70 terms this decision historical. Saina Devi, a female pensioner of Palampur Sub-Division says an enhancement of Rs.100/- in the pension is a new year gift from Prof. Prem Kumar Dhumal for the poor, weaker and neglected sections of the state.

It is not for the first time that the State government under Dhumal has increased the monthly social security pension being given to the eligible persons. Earlier, it was in 1998, the then BJP government headed by him hiked the pension to Rs.150 from Rs.100. Again, he announced a raise of Rs.50 in the monthly pension in the year 2000. The present enhancement of 50 per cent in the pension will directly benefit 237,250 pensioners of the State under the oldage, widow, physically challenged and leper categories. It is also interesting to note that in 1977, the erstwhile state government under Shanta Kumar gave a significant hike of 67 per cent in the social security pension and raised it from Rs.30 to Rs.50. The social security pension scheme was launched in the state on Nov 01, 1971 with an amount of Rs.30/- per month.

In Kangra district a total of 45,268 are being benefitted under the scheme. It includes 21,902 oldage pensioners, 10,749 widows and 4,047 under the physically challenged category. The National Oldage Pension Scheme also serves 4,655 persons. The District Welfare Department spends over 14crore annually under various pension schemes.